Darts has boomed as a sport in recent years, with prize money growing and big TV audiences tuning in for the major tournaments.

The PDC (Professional Darts Corporation) and a pool of colourful, talented, international players have significantly boosted the profile of the game in the UK, Europe and beyond. There are huge, raucous crowds of thousands of fans in attendance at tournaments, with massive prizes on offer and big support for the best players.

Before 1993 darts was organised by the BDO (British Darts Organisation), but the PDC set up a separate franchise and has been very successful in attracting top talent. The BDO continues, with less high profile names, but players can choose to compete in either BDO or PDC events. The Grand Slam of Darts, held annually in Wolverhampton in November, is a PDC run tournament to which the best players from the BDO are invited to play.

It’s easy to get caught up in the atmosphere if you are watching darts live. However, if you’re serious about implementing a profitable strategy when it comes to betting on darts there are a few key points to bear in mind.

Keeping a cool head, thinking long term and placing your bets on darts in calm, pragmatic manner is the best way of having a chance of making a profit. Having a wager via the websites or apps of bookmakers such as Betfair and Paddy Power is a great way to evaluate the odds on a number of darts betting markets and place a smart bet accordingly.

If you have never played or watched darts or simply need a reminder on the rules before placing a bet, this is how it works. The darts board is hung at a height of 5ft 8” (1.73m) from the ground, with the players throwing from a distance of 7ft 9.25” (2.37m).

The two players take it in turns to throw three darts at the board, looking to get down to a score of 0 from 501. After each turn their tally from the three throws is calculated and taken away from the running total, with each dart offering them up to 60 points and a maximum of 180 available from each visit.

A bullseye is worth 50 points, an outer bullseye 25, whilst there are numbers 1 to 20 round the board, with an inner circle offering treble points and an out circle scoring doubles. Players win the ‘leg’ by reaching zero first, but to ‘checkout’ they must end the leg with a double or a bullseye. The player who throws first logically has an advantage to win the leg.

Usually it’s the best of five legs (first to three) per set. Matches can be best of five sets or up to best of 13, depending on the stage of the tournament. Sets are used in the PDC World Championship, BDO World Championship and World Grand Prix, but increasingly tournaments are using the matchplay format, where it’s best of X number of legs. The UK Open and the Grand Slam of Darts use the legs (matchplay) format, for example. 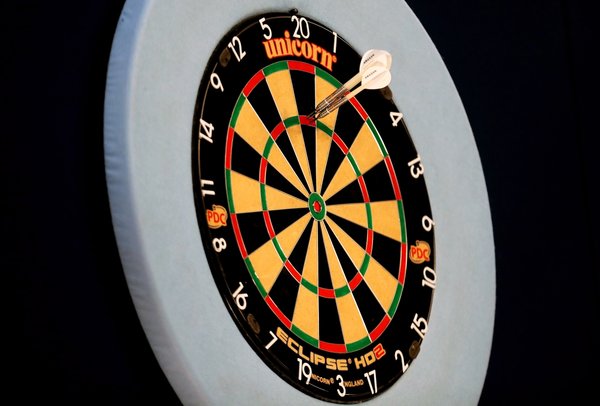 Types of bets in darts

The options available for bettors in the darts market are as diverse as ever, with plenty on offer. Some typical wagers on the darts are as follows:

As simple as it gets, the 1x2 market sees punters betting on who will win a specific match. In most tournaments matches cannot be drawn, but in some competitions, such as Premier League Darts, matches can result in draws.

These types of bets are common when one player is a big favourite to win his match. Bookmakers make it interesting by offering handicaps of certain numbers of legs (or sets) to make the betting more intriguing. So you might bet on the favoured player to win even with a handicap of -2.5 legs and you will get higher odds for predicting a win by over that specified margin. The handicaps are offered in legs in matchplay tournaments, or in sets in the longer ‘set play’ matches, in the World Championship, for example.

Like a bet on a tennis player to win Wimbledon, or a football team to win the World Cup, here the punter picks who they think will win a darts tournament such as the PDC World Darts Championship or UK Open. Once the draw has been made for a major tournament check out the odds, do as much research as you can and place a sensible wager on a player you fancy.

Who will win leg

If betting whilst the action is taking place is your thing this could be the best type of darts bet for you. You can place in-play bets via many bookmakers’ websites or apps on who will win the next leg or ‘To win leg 15’ or ‘To win leg 16’ and so on.

The sound of a referee such as Russ Bray – affectionately known as The Voice – calling a 180 is one of the most familiar in darts. Players score 180s (3 x treble 20) pretty routinely but they still get a big cheer from the crowd. You can place bets such as which player will register the first 180 of the match, which player will score most 180s, how many will be scored in the match and how many 180s each player will manage in the match.

For a player to score the perfect 501, winning a leg in 9 darts takes huge skill and is pretty rare. In the history of the sport 9 dart finishes have been televised live on just over 50 occasions, with players winning big prizes for achieving them. There are 3,944 possible routes to a 9 dart 501, with big pressure coming on the final ‘outshot’ on the ninth dart if the player is in with a chance. You can place a bet on ‘will there be a 9 dart finish in the match?’. Look for the highest odds you can get.

There are several other types of darts bets, such as correct score, how many legs will there be in total in a match and highest ‘checkout’ score in the match. Once you know the rules and become familiar with some of the main players, getting into it watching and betting on darts provides great entertainment.

Look into player form, statistics, head-to-head records, the players’ suitability to the tournament format and read as much as you can around the sport before placing your bet.