The Betfair Chase is a Grade 1 steeplechase over three miles and one furlong which is open to horses aged five and older and is traditionally held at Haydock Park on the last Saturday in November. Inaugurated in 2005, the most successful horse in the race’s short history is Kauto Star, with four wins, followed by Cue Card, who has three wins.

In fact, in all its 14 runnings, the race has been won by just seven different horses. The latest multiple-winner is Bristol de Mai, who has triumphed in the 2017 and 2018 renewals. At just seven years old, Nigel Twiston-Davies' grey gelding looks a good bet to continue this trend.

Ruby Walsh – The most successful jockey in the Betfair Chase, winning the race for a third time aboard Kauto Star (right) in 2009

Betfair Chase day is one of the most prestigious days of Haydock’s season, and features several other valuable races on the card, including:

There is a big interest in National Hunt racing, both from casual and more serious punters, and as such, there is a large number of bets placed on the Betfair Chase, both online and in betting shops – also known as bookies - in the UK & Ireland. The Betfair Chase is usually shown on ITV and it is usually watched by a big audience.

As with any big race, the top online bookies like Paddy Power and in particular Betfair will have Betfair Chase Free Bets and Betfair Chase Betting Offers. Often the bookies will give you an enhanced price on one of the favourites, or they may offer a Bet Through The Card – get free bets when you bet on the first race of the card at Haydock on Betfair Chase Day. Either way, we have you covered here with the best sign-up offer and betting specials for the Betfair Chase.

Want to know which horses the expert Timeform Tipsters are backing on Betfair Chase Day? You can get free tips for every race on Betfair Chase Day either on the Timeform website or app, in the form of the Tip Sheet, or choose to follow one of our profitable premium tipping services such as TV Focus, which picks out the best bets on all races televised on ITV Racing. However you like to bet, Timeform has you covered with Betfair Chase betting tips.

Follow all the build up to the Betfair Chase on the News pages at Timeform. Whether you are after the latest betting odds, market movers, going updates and non-runners, plus the latest from the stables of the top horses for the Betfair, you’ll find it right here. Simply want to know which horse was first past the post? Then go to our Results page to get the latest Betfair Chase day Results

Betfair Chase Past Winners – since its inauguration in 2005 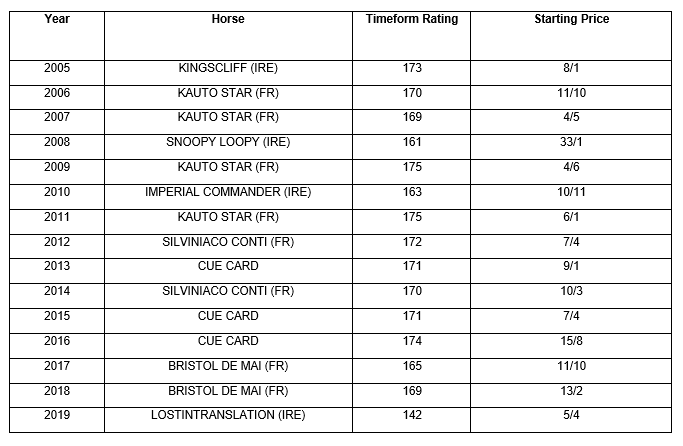