The 1000 Guineas is a Group 1 race over a mile and is open to three-year-old fillies. It takes place on the Sunday following the 2000 Guineas on the Rowley Mile, and is the second of the five British Classics, the first of two restricted to fillies. It is also the first race of the fillies’ Triple Crown, followed by the Oaks at Epsom and the St Leger at Doncaster, though it is rarely attempted nowadays.

The 1000 Guineas has an impressive recent roll of honour, with Legatissimo, Minding and Winter – who all went on to further success at Group 1 level – all winning the race in recent years. Billesdon Brook became the biggest-priced winner (66/1) in the race’s history when landing the 2018 renewal for Richard Hannon.

The 1000 Guineas takes centre stage on the card, while the Group 2 Dahlia Stakes acts as the chief supporting race. There is also a nice mix of listed, handicap, and maiden races on the card, including:

There is big interest in betting on the 1000 Guineas both with the online and betting shop bookies in the UK & Ireland. The 1000 Guineas is usually shown on ITV and a huge audience will tune in to cheer on the UK & Irish runners. There are normally plenty of enhanced offers during Guineas weekend, so you are advised to shop around before placing your bets.

As with any big race, the top online bookies like Paddy Power and Betfair will have 1000 Guineas Free Bets and 1000 Guineas Betting Offers. Often the bookies will give you an enhanced price on one of the favourites, or they may offer a Bet Through The Card – get free bets when you bet on the first race of the 1000 Guineas meeting. Either way, we have you covered here with the best sign-up offer and betting specials for the 1000 Guineas.

Want to know which horses the expert Timeform Tipsters are backing on 1000 Guineas Day? You can get free tips for every race on 1000 Guineas Day either on the Timeform website or app, in the form of the Tip Sheet, or choose to follow one of our profitable premium tipping services such as TV Focus, which picks out the best bets on all races televised on ITV Racing. However you like to bet, Timeform has you covered with 1000 Guineas betting tips.

Follow all the build up to the 1000 Guineas on the News pages at Timeform. Whether you are after the latest betting odds, market movers, going updates and non-runners, plus the latest from the stables of the top horses for the 1000 Guineas, you’ll find it right here. Simply want to know which horse was first past the post? Then go to our Results page to get the latest 1000 Guineas results.

1000 Guineas Past Winners – this Century 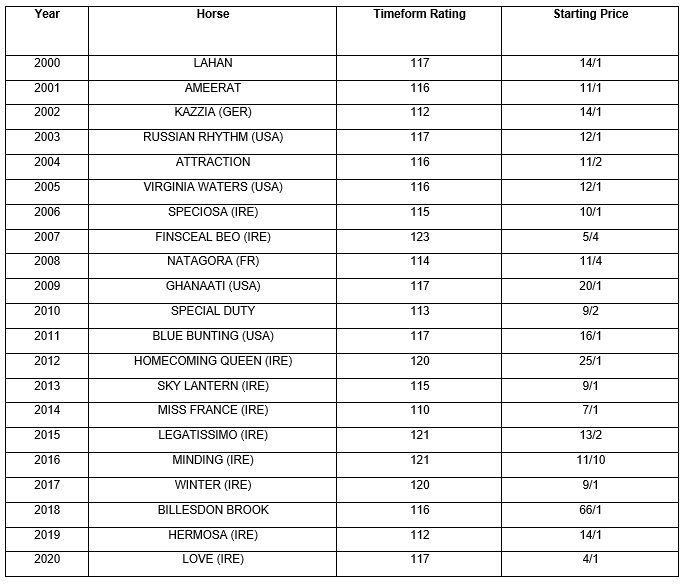