The Timeform Knowledge: Pool betting and the Placepot 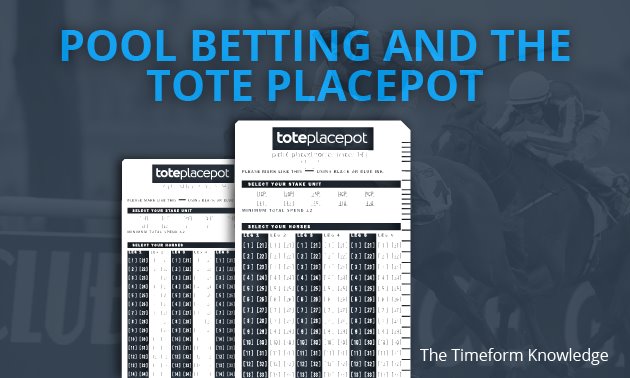 Simon Rowlands tackles the art and science of pool betting in the latest module in the Timeform Knowledge.

"The desire to “have a shout” tends to see favourites overstaked and outsiders ignored more than they should be, and it tends to see multiple selections loaded towards the early races..."

If you go racing abroad you will find that pool betting, or pari-mutuel betting, is generally a much bigger phenomenon than in Britain and Ireland.

Like them or loathe them, bookmakers in the conventional and online sense are a part of the fabric of racing in these parts, though that fabric can look more charity shop than haute couture as a consequence.

For instance, pool betting in Hong Kong, where bookmakers are not tolerated, is absolutely huge and provides a rich source of revenue to the sport and to Hong Kong society itself.

Pool betting involves betting on a proposition – such as a horse to win or to place – with the returns determined by the size of the whole pool, the number of winning tickets and the amount deducted (the “rake” or “takeout”) by those who administer the market.

That uncertainty of what a winning bet will return can be seen as a drawback of pool betting, or as an additional challenge. It is a challenge that many of the world’s biggest punters are happy to take on, especially where pools are large.

In Britain, pool betting suffers from a perception problem in many respects. It is often depicted as for “mugs”, and a large portion of the markets are indeed made up of “recreational” money.

That, in itself, provides an opportunity for the more discerning bettor, even when the takeouts are disappointingly large.

Let us consider one such market, the Tote Placepot, in which the punter needs to get a horse placed in the first six races on a card, with “placed” being as in the rules given in the each-way betting module of The Timeform Knowledge previously.

A mug bet? Not necessarily.

As with all pool betting, you are pitting your wits against the crowd, and the seductive nature of the Placepot is one reason why the crowd may be “dumber” in this context than is usual.

The Placepot is a fine recreational bet – you can have a whole afternoon of fun for a small outlay – but if you want to take it seriously you need to start thinking differently to the masses.

The desire to “have a shout” tends to see favourites overstaked and outsiders ignored more than they should be, and it tends to see multiple selections loaded towards the early races, so that punters at least have some “action” before their anticipated demise.

This situation can be exaggerated under certain circumstances and turn an ostensibly poor-value bet into a good one.

There are some important points to note about the Placepot: if you select a horse who proves to be a non-runner your stake will be diverted to the favourite (thus accentuating even more the favourite-longshot bias mentioned above); and non-runners may also affect the number of places on offer.

The withdrawal of an outsider can make the selection of a 2/1 favourite in an eight-runner race suddenly seem far less the copper-bottomed certainty that it was now that it has to finish first or second rather than first, second or third.

Furthermore, as Placepots are such good fun, many casual punters pick out their selections well in advance and pay little heed to late and changing circumstances. A downpour just before the first race might lead to a slew of non-runners, and it might also lead to a suddenly vulnerable favourite or an unanticipated effect on the draw.

There is likely to be more recreational money in the pools on days on which there are more casual racegoers. Some think all those music nights that British racing seems so fond of these days are an abomination, but the committed Placepotter is likely to be a fan of that Boyzone tribute act- just so long as he or she does not have to listen to them.

Serious Placepot punters will nearly always structure their bets with many permutations of lines, taking several or even all of the runners in certain races, and they are likely to place these “perms” late, so that information is as up to date as it can be.

Come election time, the tongue-in-cheek instruction is to “vote early, vote often”: with Placepotting it should be “bet late, bet often”.

Making long-term money out of Placepots involves landing on enough favourable dividends to sustain the losses elsewhere. It does not involve regularly picking up smaller dividends, which appeal to the “action junkies” but hardly ever represent good value.

Comparing Placepot dividends on British racing in October 2015 with the “fair” place odds for the same derived from Betfair SP (normalised to 100% per place) showed that not one dividend which paid less than £245 to a £1 stake represented value, and that dividends of less than £100 were generally particularly poor propositions.

Those “fate of the fav” figures record whether the favourite was placed (“1”) or not (“0”), or that one of two joint-favourites (“1/2”) managed that feat, from first race to last reading from left to right.

In all but the first example, big dividends occurred despite only three of six favourites being unplaced.

Interestingly, the freak Ludlow dividend began with a race in which a non-runner reduced the field to seven, with the odds-on favourite third and therefore unplaced behind 16/1 and 33/1 rivals, and featured only one contest in which three places were on offer.

The Lingfield bonanza involved the favourite in race four being withdrawn for being unruly in the stalls, which was much too late for even the most farsighted Placepotter to respond! But it helps to illustrate that unexpected events can disrupt out of proportion to their likelihoods of occurring.

Predicting these big-value dividends unerringly is impossible. But knowing what circumstances can lead to them is not.

Identify weak favourites – especially those who may unplace if they fail to win – act late and fully informed, bet in permutations and into pools in which shrewd money is in short supply, and you will have tipped the odds more in your favour at least.