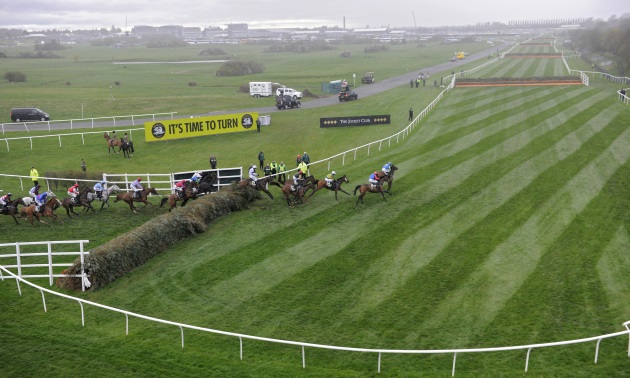 Simon Rowlands analyses the key trends for Saturday's Becher Chase at Aintree and advises a bet.

Much has changed in horseracing since Captain Becher got decanted into a brook at Aintree in the 1839 Grand National, ensuring the naming of the iconic Becher’s Brook fence and more recently the Becher Chase (13:30).

After the experience, Becher reportedly observed that he hadn’t realised how filthy water tasted without the benefits of whisky. Top early-Victorian banter.

What has not changed entirely is that “jumping” remains the name of the game, not least on the Grand National course, despite modifications. In the last 10 editions of the Becher Chase itself, 25% of starters have fallen/unseated or similar and 19% have been pulled up.

Simply getting round is a major consideration where Saturday’s William Hill-sponsored event is concerned, then. There is an article elsewhere on this site which looks at the race using Timeform’s unique “jumpability” ratings and I urge you to read it.

It is also worth considering the trends given that this is a race that has become firmly established since its first running in 1992. This is what the ten-year ones say, with % of rivals beaten being the most meaningful measure as usual. 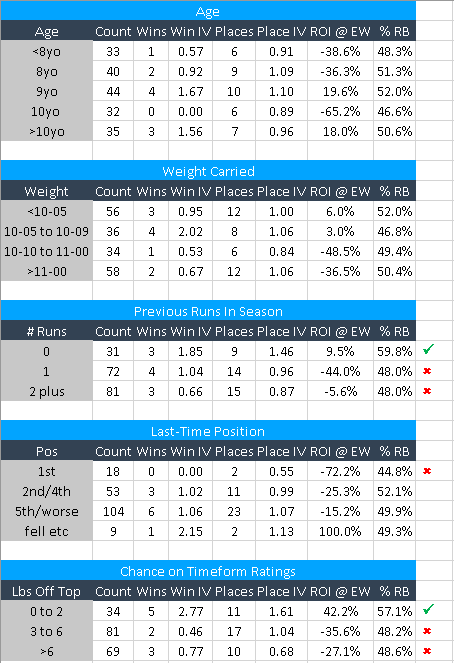 The shortage of significant trends is of note in itself. There is no customary bias towards younger horses – with jumping experience at a higher premium than usual – nor towards last-time winners. Indeed, last-time winners have performed poorly on every measure.

At the same time, last-time fallers/unseated etc have won more than twice as often as by chance and doubled each-way investments at Starting Price, though that is quite a small sample. Perhaps fortunately, given the mixed messages involved, there are no such qualifiers this year.

There is a slight bias towards lighter-weighted horses, a bigger one towards horses making their reappearances, and a very healthy return for horses rated within 2 lb of top on Timeform weight-adjusted ratings. That last cohort has won half the available races from just 18.5% of the representation.

Put all those elements together and it rather looks as if anything could win, which is true, of course. However, I do think that KIMBERLITE CANDY has a pretty good chance, and here is why.

Still an eight-year-old, he has had little racing of late, being aimed at the Grand National that never was at this course in April after a runaway win in the Classic Chase at Warwick in January, and he was one of the stronger fancies for that event until coronavirus intervened.

One of the reasons he was so well fancied was that he has form over these fences, having finished second to Walk In The Mill in this race 12 months ago. He is 8 lb worse off with that rival (who is going for a Becher hat-trick here), but Warwick clearly showed that Kimberlite Candy was progressing rapidly. Timeform’s handicappers reckon both horses have leading chances.

Kimberlite Candy wins the McCoy Contractors Classic Chase by 10 lengths at @WarwickRaces and marks himself out as a leading Randox Health Grand National contender for Tom Lacey and Richie McLernon. #stayingpower

All credit to Captain Chaos for holding on to second place! pic.twitter.com/gZyFW0PUx8

Unlike Walk In The Mill, Kimberlite Candy does not have a recent race under his belt, but that has been anything other than a disadvantage over the years, as we have seen, and trainer Tom Lacey is a dab hand at getting one ready off a break.

Conditions promise to be more testing than they were this time last year, and that should suit Kimberlite Candy, also, on what we know. At around 490 yards, the Aintree Grand National run-in is second only to Cartmel (around 800 yards) in length among British racecourses. Not just jumping but staying is the name of the game here.

As always, it is important to bet in the right way as well as on the right horse. I cannot guarantee that Kimberlite Candy is the latter, but 15 declared runners do mean that this handicap is marginally better tackled from a win-only than an each-way point of view.

The best-price win book at the time of writing is 129% (you would have to stake a total of £129 in proportion to each of the runner’s win odds to guarantee a return of £100 whatever the result) but 126% per-place. Each way splits the difference.

That assumes conventional terms of one quarter the win odds for three places, but it may be possible to boost the attractiveness of an each-way option by shopping around. Hopefully, Kimberlite Candy will render such considerations unnecessary.