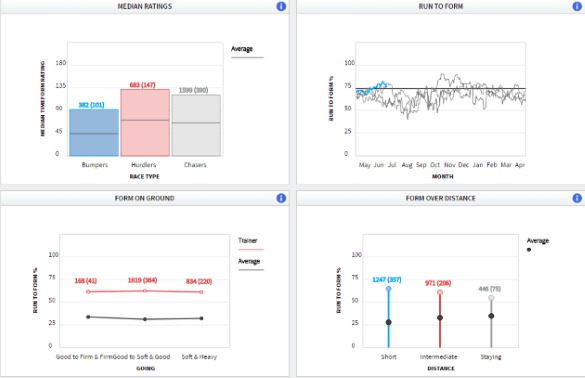 A description of the Run To Form metric that is used in the Timeform jockey and trainers Statistics and Visuals Dashboard.

Contextual data is at the heart of Timeform’s methodologies. Complementing a finishing position, information such as performance ratings, timefigures and detailed digital reporting all help to frame a performance into a context in which it was achieved.

A key contextual metric used by Timeform (as well as others) in recent years, is Run To Form. By comparing a horse’s pre-race rating to that which it achieved, we can assess factors such as a horse’s consistency and trainer form. It can be a much better gauge of a horse, trainer or jockey than simple strike rate as it considers much more than a simple result.

A binary ‘Yes’ or ‘No’ view on whether a horse ran to form is overly simplistic in a large number of instances. For example, a horse may be subject to a pace or draw bias which stops it from showing the full extent of its abilities. In such a scenario, it would be unfair to evaluate this performance in a total negative way. Under new classification rules, this would be highlighted separately.

A blanket value for comparing pre- and post-race ratings has been replaced by a dynamic counterpart. This allows for a much fairer way of assessing performance under the conditions the horse encountered.

Also, the in-depth analysis produced by reporters is now fully harnessed as part of the metric. Scenarios where horses were flattered or unlucky in running are now catered for, resulting in a much more accurate evaluation of that performance.

The benefits to Timeform customers begin with the launch of the new Jockey and Trainer Dashboard product. Large amounts of both the initial and subsequent statistic sets are powered by the new Run To Form metric, including Trainer Form visualisations and Jockey Radars.

Click HERE to find out how you can subscribe to Timeform Race Passes and get the full benefit of the ultimate form guide.

Friday 20 May Go to full race