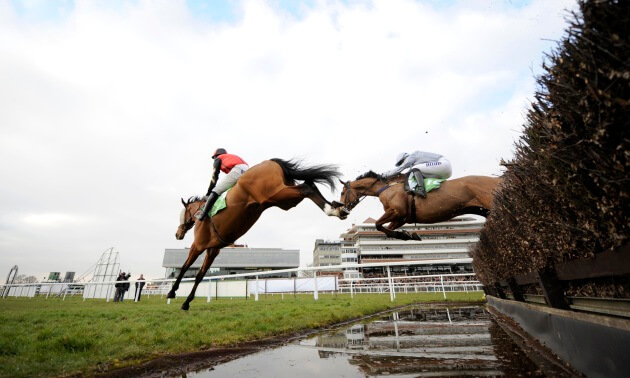 Stage Star will seek to build on his impressive chasing debut in the Coral Racing Club Novices’ Chase at Newbury on Friday.

The Paul Nicholls-trained six-year-old Stage Star was a high-quality hurdler, winning the Grade One Challow at the aforementioned track before disappointing at the big festivals at Cheltenham and Aintree.

His first run over larger obstacles came in a competitive Warwick novice at the beginning of the month, where he defeated Dan Skelton’s Greatwood winner West Cork by a facile 13 lengths under Harry Cobden.

A progression to Grade Two level now beckons, with the gelding set to take on four rivals over two and a half miles.

Dan Downie of Owners Group, the partnership in whose colours the horse runs, said: “I’m hoping he jumps as well as he did at Warwick, because then he would have half a chance.

“His best attribute is the way he travels and settles. If he settles, we’d be hopefully looking for a good run.

“When he disappointed at Cheltenham and Aintree, he obviously had excuses and it was quite clear early on that it wasn’t going to happen, as he was just very keen.

“If he just drops the bridle, jumps and settles, I’d hope he’d be bang there.”

Nicholls added: “Stage Star won the Challow last year and won at Warwick the other day.

“Two and a half is ideal for him. We will see what happens after this, I haven’t made any plans for these novice chasers yet.”

A key rival will be Nigel Twiston-Davies’ Beauport, another horse who made a storming start to his chasing career when winning the Listed Colin Parker at Carlisle last month.

Taking the race by half a length from the classy Millers Bank, the gelding was immediately given the Newbury contest as a next target and has been training well in preparation.

“He’s been targeted at this race, we’d prefer it to be softer ground so hopefully when we get there it’ll be safe. ”

“We’re going to get there early and walk it with Bryan and Philippa (Burrough), the owners.”

Of Beauport’s Colin Parker success, Llewellyn said: “It suited him well, it rained on the day and it was very soft.

“That’s what he loves, whether he’s as effective on better ground we’re yet to find out.”

Philip Hobbs’ Camprond will look to put a short-lived chasing debut behind him as he has a second start over fences in the race.

A handy hurdler last season when mixing novice contests with quality handicaps, the JP McManus-owned gelding won the Grade Two Persian War before signing off with a valuable success in a Punchestown handicap.

His chasing debut came at Exeter earlier in the month, but the six-year-old and rider Aidan Coleman made it no further than the first fence when parting company after an awkward jump.

Camprond then wandered loose around the track as the race continued, though he and all the other runners were ultimately none the worse after a few near misses.

“Unfortunately that day at Exeter we didn’t get too far, but I believe he’s schooled well since,” said Frank Berry, McManus’ racing manager.

“Aidan has been happy with the way he’s jumped when schooling so we’re hoping for a clear round and that, hopefully, he runs well.”