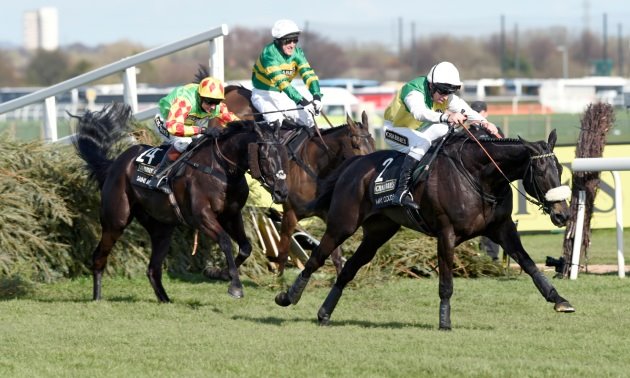 After the unveiling of the weights, we reveal our provisional top-rated runners for the 2016 Crabbie's Grand National at Aintree on Saturday 9th April.

Did Tony McCoy retire twelve months too soon? Timeform reckon the record-breaking champion jockey would be well placed to claim a second Grand National win this April were he still in the saddle.

McCoy’s boss JP McManus is responsible for no fewer than six of the top 20 on Timeform ratings for the 2016 Grand National, following today’s announcement of the weights for the Aintree showpiece, which takes place on April 9th. The 2015 fifth Shutthefrontdoor (McCoy’s final mount in the race) heads the way from a total of 126 entries, whilst McManus’s famous emerald green and gold silks are also represented by Double Seven (third in 2014), Gallant Oscar, Gilgamboa, Pendra and Cause of Causes in the Timeform top 20.

“Shutthefrontdoor took really well to the National course in 2015, when he looked a serious threat to the winner Many Clouds for most of the way. He reportedly picked up an injury during the race, which may explain why he faded late on and stamina certainly isn’t a major concern with him. He’s got relatively few miles on the clock and still appeals as a horse open to some improvement, so he looks very much one for the shortlist again,” explained Timeform jumps handicapper Phil Turner.

Barry Geraghty, of course, succeeded McCoy in the role as retained jockey to McManus and will have the enviable task of choosing from the owner’s strong Aintree team, though his decision may be swayed by the fact he is unbeaten from both previous rides over fences on Shutthefrontdoor, notably in their victory in the 2014 Irish Grand National.

Shutthefrontdoor has had only one run so far in 2015/16, shaping encouragingly when third over hurdles in the autumn, and it wouldn’t be a surprise to Timeform if this tactic of reverting to the smaller obstacles in order to protect a chase handicap mark becomes a popular tactic again with leading Grand National hopes, following an apparent shift of policy by the BHA handicapper with the 2016 National weights.

“In recent years, the top of the handicap has been compressed in order to favour the better-quality runners, but it is nothing like so pronounced this time around,” explained Turner. “For example, top weight Many Clouds is only 1 lb well-in compared to what he’d carry on a conventional course, compared to the 5 lb drop he enjoyed in 2015.”

“That said, we’ve long been critical of any runners getting preferential treatment, so this development is a good thing for the race as a whole and it certainly doesn’t mean those towards the head of the weights have had their chances severely compromised. Indeed, Many Clouds remains one of the best-handicapped runners in the field and holds strong claims of becoming the first horse since Red Rum in 1974 to claim back-to-back wins.”

A win in the Grand National would almost certainly decide the trainers’ championship, with reigning title-holder Paul Nicholls looking to have the strongest team – numerically at least – at present thanks to four horses (Silviniaco Conti, Sam Winner, Unioniste and Black Thunder) in that Timeform top 20, compared to just one apiece for his main rivals Willie Mullins (Don Poli) and Philip Hobbs (Kruzhlinin). It is a smaller yard, however, which houses the most interesting outsider on Timeform ratings.

“Lucy Wadham’s Le Reve has long appealed as a sort who’d take really well to Aintree and he looks overpriced at 50/1 on the back of his recent Sandown win,” added Turner.