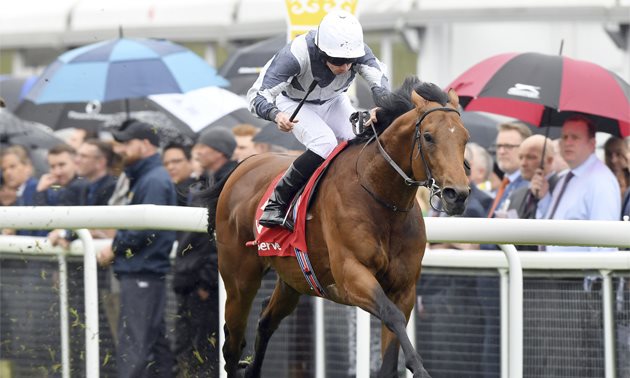 O'Brien and Moore combined for a second winner on the afternoon as Circus Maximus provided his trainer with an eighth win in the St James's Palace Stakes.

Circus Maximus showed his adaptability when dropping back in trip to land the St James's Palace Stakes at Royal Ascot.

Last seen finishing sixth in the Investec Derby at Epsom, the Galileo colt needed to be supplemented at a cost of £45,000 for the Group One contest over a mile.


Having won the Dee Stakes over an extended 10 furlongs before his tilt at Classic glory, it was seen as a bold move by Aidan O'Brien running him over half a mile less.

Wearing blinkers for the first time, Ryan Moore was happy to take a lead off Fox Champion before making his bid for home with two furlongs to run.

As Irish Guineas winner Phoenix Of Spain dropped away, the favourite Too Darn Hot became embroiled in a battle with Circus Maximus (10-1).

Having seen off last year's champion juvenile, it was his John Gosden-trained stablemate King Of Comedy who flew home to get closest at the line, but Circus Maximus held on by a neck, with Too Darn Hot three-quarters of a length away in third.

O'Brien said: "Derrick (Smith), John (Magnier) and Michael (Tabor) all decided between themselves (to run in this race) and at 11.45am (on the day of supplementary entries) they let us know that they were thinking of doing this and we ran with it.

"It's hard to believe and we're just privileged to be a small part of it.

"It was a big challenge for the horse and it was a very difficult one to deal with - coming back (in trip) like that - and that's why he had the blinkers on, because he didn't have much time to learn."

Frankie Dettori said of the beaten Too Darn Hot: "He came there to win and I hit the front, but in the last 100 yards he didn't have the legs for it.

"I think the stiff mile at Ascot was too much."