The Grand National course is triangular in shape and The Grand National itself is run over two complete circuits taking in sixteen spruce fences first time around and fourteen the second and still provides one of the toughest tests ever devised for horse and rider. Since 2013, the run to the first fence in the Grand National was reduced in a bid to improve safety, resulting in the overall race distance shortening from the usual 4½m, though the run-in is still 494 yards long and includes an elbow. 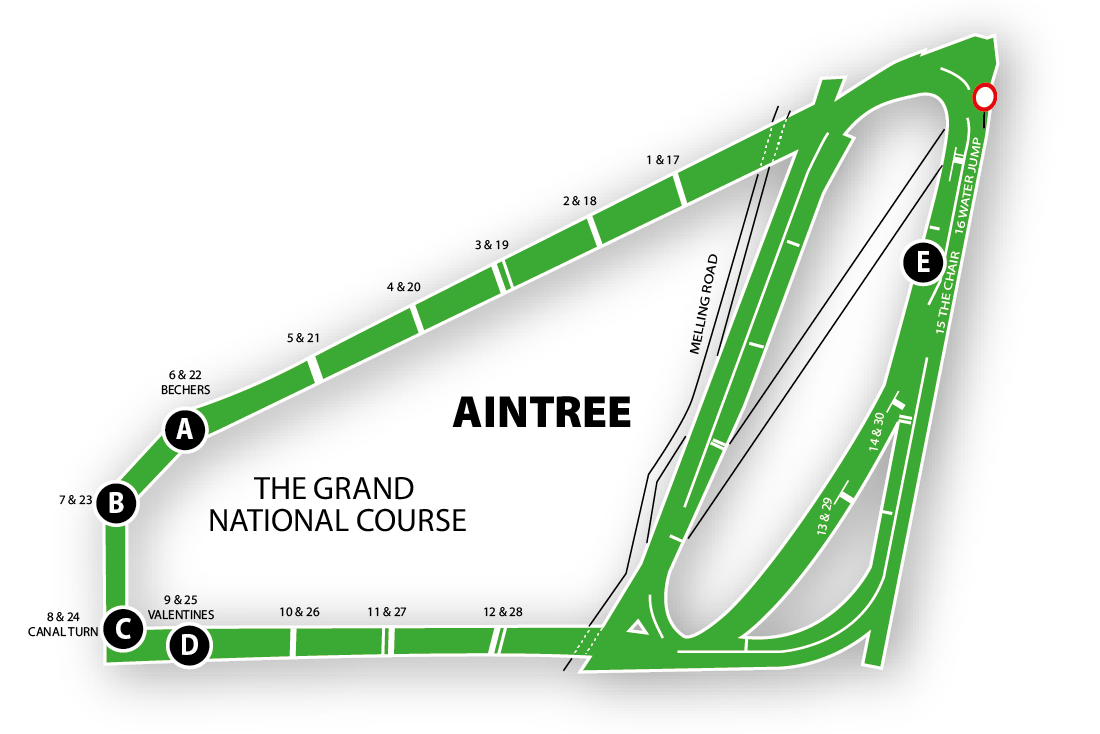 Of the 16 fences which make up the National course, five of the jumps have become famous in their own right. Becher’s Brook, Valentines’ Brook, The Chair, Canal Turn and Foinavon are names which are all part of the heritage of the Grand National. Becher’s Brook takes its name from Captain Martin Becher, one of the Grand National’s pioneering jockeys. Becher, who fell at this fence and hid in the brook to avoid injury from the horses still jumping the fence, is reputed to have said after his experience that he had not known how "dreadful water tastes without whisky in it". Jockeys have compared it to “jumping off the edge of the world” due to the fact that the landing side of the fence is 10 inches lower than the take-off side. Becher’s Brook is the 6th and 22nd fence in the Grand National. One of the smaller fences (4ft 6in) in the Grand National, Foinavon was re-named in 1984 after the 100/1 shot who avoided a mass pile-up here in 1967 and went on to win the race. The fence is just 4ft 6in but a loose horse veered dramatically to his right at the 23rd fence and a pile-up ensued. Several horses hit the ground, then began running up and down the fence preventing others from jumping it, and bringing the race effectively to a halt. However, Foinavon had been lagging so far behind that his jockey John Buckingham had time to steer his mount clear of the chaos. Foinavon is the 7th and 23rd fence in the Grand National. The Canal Turn is notable for the sharp left turn that the runners have to take as soon as they have negotiated the fence. The turn is almost 90 degrees and it is not uncommon for jockeys to become unbalanced as they change course; unseatings and falls are common. The fence has been the scene of many a pile-ups over the years. Horses that refuse to jump this fence can interfere with other runners and any jockey who decides to cut the corner also runs the risk of sliding out of the saddle. The Canal Turn is the 8th and 24th fence in the Grand National. Valentine’s Brook is named after the horse who jumped the fence in a unique fashion in 1840. The Irish amateur Alan Power had struck a bet that he and his horse, Valentine, would be ahead at the wall. He therefore set off at a terrific lick and approaching the second brook he was well clear. The horse then came almost to a halt before rearing up and corkscrewing over in a style which astonished observers. Power managed to get his mount going again and ultimately won his bet. Valentine’s Brook is the 9th and 25th fence in the Grand National. 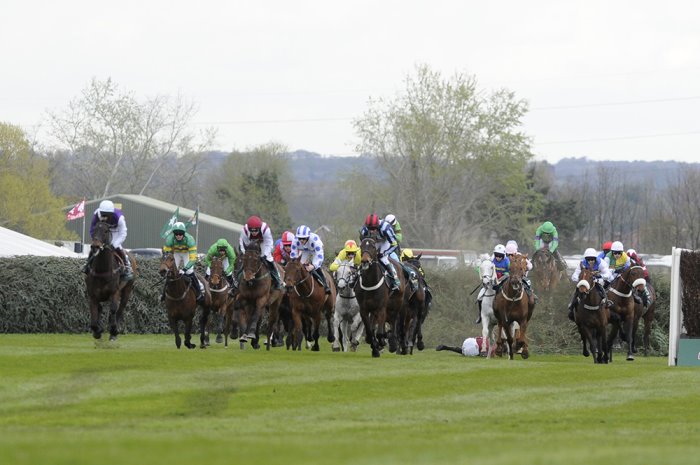 Positioned in front of the grandstand, The Chair is the tallest fence (5ft 3in) in the Grand National and horses must also clear a 6ft ditch on the take-off side, with the landing side being 6in higher than the take-off side. The Chair receives its name from the chair once sited alongside the fence, at which a distance judge would sit when races used to be run in heats. Horses that tailed off too far were disqualified from later heats. The fence was originally known as the Monument Jump and it is one of only two fences which are navigated once by the riders, the other being the Water Jump. The Chair is the 15th fence in the Grand National.

Check out this video about how the Grand National fences are built: