The Chesham Stakes is a Listed contest held over seven furlongs on the third day of Royal Ascot.

A wide-open renewal which could go the way of BATTLEGROUND who, although only fifth on debut, will have learned plenty and is set to take a marked step forward. Golden Flame promises to see this stiff 7f out strongly, so he's considered along with the comfortable Newbury scorer First Prophet.

The race is restricted to two-year-olds only, with a 5 lb allowance for any fillies who take their chance; while horses who enter that have previous victories in Listed races and Group races have to carry 3 lb and 5 lb penalties respectively.

Established in 1919, the race is named after the 3rd Baron Chesham, and was originally contested over five furlongs. The race was then held over six furlongs for a period, before being adjusted to its current distance of seven furlongs in 1997. The race is restricted to two-year-olds whose sires have won at a distance in excess of 1 mile and 1½ furlongs, or in excess of 1,900 metres.

The race has been won by some notable names in recent years, including the Aidan O’Brien-trained Churchill in 2016, who went on to complete a Guineas double in 2017; winning the 2000 Guineas at Newmarket and the Irish 2000 Guineas at the Curragh.

The 2005 renewal of the Chesham Stakes, along with the rest of Royal Ascot that year, took place at York due to Ascot racecourse being renovated. 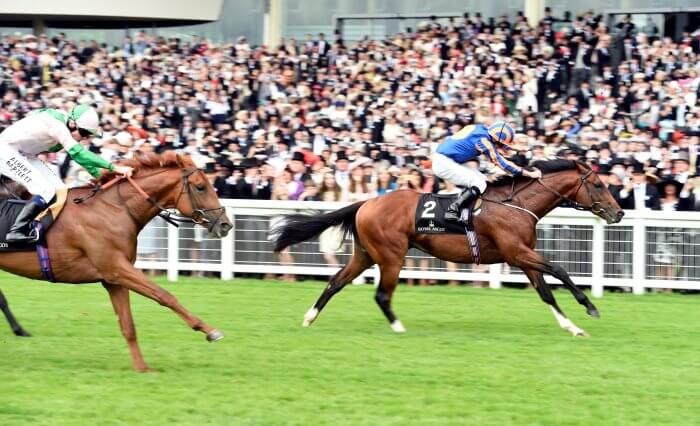 What distance is the Chesham Stakes?

What time is the Chesham Stakes?

What weights are carried in the Chesham Stakes?

What is the purse for the Chesham Stakes?

Who is the leading jockey in the Chesham Stakes*?

Who is the leading trainer in the Chesham Stakes*?

Paul Cole and Aidan O’Brien, both with four wins

Who won the Chesham Stakes?

You can check out our Chesham Stakes results page here to see a List of previous winners.