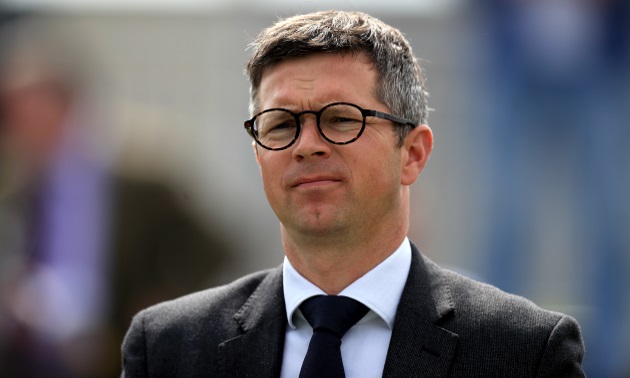 Roger Varian's filly ran out an impressive scorer on her racecourse debut at Newmarket last month - and that form received a significant boost on Thursday after the runner-up, Raffle Prize, landed the Queen Mary Stakes.

Daahyeh was the 4-1 market leader for her Group Three assignment and after travelling well in midfield, she moved towards the front racing inside the final two furlongs.

Ken Condon's Irish challenger Celtic Beauty briefly looked set to make a real race of it, but the further Daahyeh went the better she looked and she was well on top at the finish - passing the post a length and a half to the good.

Unconsidered 100-1 shot Aroha fared best of those that raced on the far side of the track in third.

DAAHYEH runs out a very impressive winner of the (Group 3) Albany Stakes at #RoyalAscot for @varianstable under David Egan!

Really powered away up the hill and looked to have plenty in hand!

Varian said: "She was good on debut and the form stood up. She always worked like she would be quite nice and it was nice to see her do it like that.

"I thought we would be second with half a furlong to run. It is the first time she has been in a scrap and it took a few strides for the penny to drop - on the line she is a good winner. She got the (six-furlong) trip very well.

"I will speak to the jockey and digest with the owners, but she is promising and looks quite good.

"She looks like she will stay seven furlongs off the back of that - whether we need to go seven, I don't know, but she got the trip really well."

He added: "It is David's first Royal Ascot winner, he is making good strides and has got a good head on his shoulders. He is one of the best young riders around.

"He is not the finished article yet and he knows that, but he has not done much wrong.

"We are grateful to the owners, they have been loyal as he rode her first time up."

Egan said: "It is a big step in my career. I would like to thank everyone who has helped me to this point. I'm actually a bit emotional and I don't usually get like this.

"This is what I worked hard through my whole life for and it is great to get these big days.

"I was glad I got myself into a good position and just approaching the two I saw things were getting tight in front of me and I was about to take her back, but I pulled her to the outside in time for her to pick up.

"She had to battle in the final furlong, but when I switched my whip she picked up again and hit the line strong. She is a very nice filly. I think this (over champion apprentice title) would be at the top."

Condon said of Celtic Beauty: "We're very pleased. Just for a minute we got very excited when she briefly hit the front, but Billy (Lee) said she was probably beaten by a very good filly.

"She's a very smart filly in her own right and she's been coming forward with every run. She's pretty non descript in her home work, but her sire is very good.

"The ground drying out helped her. Had it been drier she may have lasted more, but she's got a lot of pace and natural ability. Unfortunately she just didn't last home, but she ran with great credit.

"There are a lot of options going forward. Not sure yet where she'll go, but she'll be entered in all the nice races - the Morny and the Cheveley Park later in the season, and she's in the Phoenix Stakes.

"We'll see how she comes out this, but I think there's more to come from her."

Brian Meehan, trainer of third-placed Aroha, said: "The target had been to come here, so we stuck to our guns. I'm really pleased we have because we can plan a wonderful campaign for her now.

"I think if she'd have been on this near side she'd have won. It's a month since she's run, so we're going to stick with that kind of plan with her. The Duchess of Cambridge will probably be too soon for her, but we'll see.

"The Lowther would be the race that comes to mind and then the Cheveley Park. She doesn't need too much more. That was her fourth run.

"She may only be small, but she's got the biggest of hearts."