The Norfolk Stakes is a Group 2 Flat horse race, and is the first race run on the Friday of Royal Ascot – the fourth day of the five-day meeting.

THE LIR JET was a convincing debut scorer at Yarmouth and his first-season sire landed this race back in 2016, so he's likely to run a big race provided a draw on the wing doesn't inconvenience him too much. Comfortable Newmarket scorer Eye of Heaven looks the main danger ahead of Golden Pal.

The race is open exclusively to two-year-old horses (juveniles), and is a sprint race run over a distance of 5 furlongs. This is the shortest permitted distance for Flat horses under UK rules.

The race has been run annually since 1843, although it only gained its current name in 1973, having previously been known as the New Stakes. It has also been upgraded within that time, being raised from a Group 3 to a Group 2 contest in 2006.

As of 2018, it is also part of the Breeders’ Cup Challenge series, as a ‘Win and You’re In’ qualifier for the Breeders’ Cup Juvenile Turf Sprint, which has a $1million purse. This means that the winner will gain free entry and travel allowance to the Breeders’ Cup, held at the end of the American season in early November.

For all that the race’s status as a Breeders’ Cup qualifier has added to its status, the prestige of the contest itself shouldn’t be underestimated; after all, it commonly features entries who cross the Atlantic in the opposite direction. In the past decade, US trainer Wesley Ward – a man best-known here for his ability in training juveniles – has become a recognised face at Ascot, and has had plenty of success at the fixture, saddling ten winners. They include the 2013 and 2018 Norfolk Stakes winners No Nay Never and Shang Shang Shang.

There have been several jockeys to have won the race multiple times, with Frankie Dettori managing three wins (1995, 1999 and 2014).

Meanwhile, Aidan O’Brien is amongst the trainers who’ve won the Norfolk Stakes on three occasions (2001, 2015, 2017) and he and retained rider Ryan Moore (2015, 2017) will no doubt be bidding to add to their respective tallies in this year’s race, for the Ballydoyle yard. Another trainer and jockey team who could have a big chance at the Norfolk hattrick will be Wesley Ward and Joel Rosario (2013, 2018), should they again decide to bring an entry over from California. 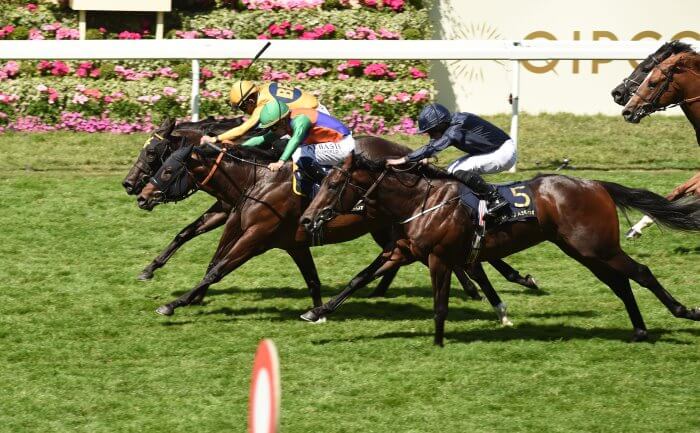 What distance is the Norfolk Stakes?

What time is the Norfolk Stakes?

What weights are carried in the Norfolk Stakes?

What is the purse for the Norfolk Stakes?

Who is the leading jockey in the Norfolk Stakes*?

Of those still riding, Frankie Dettori has the most wins with three

Who is the leading trainer in the Norfolk Stakes*?

Who won the Norfolk Stakes?

You can check out our Norfolk Stakes results page here to see a List of previous winners.