Stradivarius and Dettori have Golden touch once again 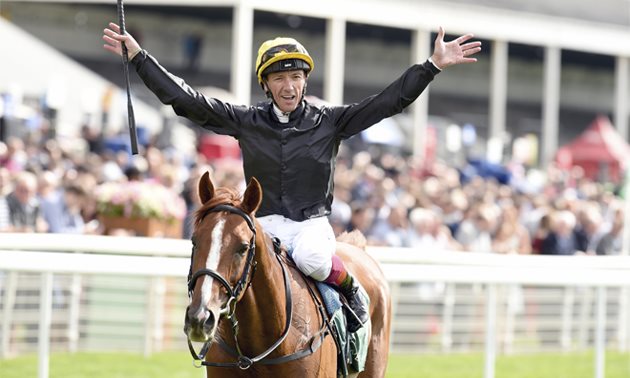 John Gosden's star stayer enjoyed a faultless campaign in 2018 - winning the Yorkshire Cup, the Gold Cup, the Goodwood Cup and the Lonsdale Cup to land a £1million bonus through the inaugural Weatherbys Hamilton Stayers' Million.

The five-year-old added the Qipco British Champions Long Distance Cup back at Ascot in October to his seasonal haul, just for good measure, and picked up where he left off when battling to a second Yorkshire Cup victory last month.

With Dettori having already won the first three races on the card, Stradivarius was all the rage to add to his tally and supporters of the even-money favourite will have had few concerns for the duration of the two-and-a-half-mile contest.

Dee Ex Bee took the field along the way for a long way, but was being ridden along rounding the home turn, with Dettori still motionless in behind.

Just for a moment Stradivarius was caught in a pocket, but once the gap came, Gosden's admirable chestnut quickened up smartly and was ultimately well on top as he passed the post a length to the good.

Dee Ex Bee (7-2) rallied to finish second, just a nose ahead of 66-1 shot Master Of Reality in third.

Dettori said: "What a horse, he got me out of trouble. He's the horse for the big occasion and people love him.

"It's great for everyone connected with the horse - every time he runs he delivers.

"I was half-thinking Capri was going best, then I changed my mind and followed Wayne Lordan, then I got the split and it was all over.

Gosden said: "When he gets into the final at Wimbledon he (Dettori) raises it to another level. He rode a beautiful race.

"He was held in there by Capri, then he saw the light and Capri went for his run and Frankie managed to wriggle through and it was noted in commentary that he was in a rather tricky position.

"He did the clever thing he was drawn two and thought, 'I will save ground all the way and wait for the gap'. It was a long wait, but the horse is very classy.

"It is not his favourite ground, as he is a much better horse on top of the ground, but he has just shown his style and he can quicken on that ground. Full marks to a remarkable horse and a sometimes remarkable, mercurial jockey.

"It's all down the horse. I think there have been great ones like Le Moss and Sagaro and Yeats as well, they are wonderful horses and great for the racing public and people get to know them.

"This little guy (Stradivarius) with his white socks and white face he looks like the Milkybar kid should be riding him rather than the jockey. He is a remarkable athlete and a charming horse to be around."