Get the Timeform runner-by-runner guide for Saturday's Diamond Jubilee Stakes at Royal Ascot.

Won first 2 starts last season before producing a career best when only just failing to overhaul Blue Point in this race. Went off the boil after but no surprise to see him bounce back.

BLUE POINT becomes only the 3rd horse in history to complete the King's Stand - Diamond Jubilee double at #RoyalAscot!

Both wins came at Haydock last season, namely the Sandy Lane Stakes and Betfair Sprint Cup (Group 1). Good third in Commonwealth Cup at this meeting in between. Not seen to best effect here final run.

Hello Youmzain holds off The Tin Man to land the Group 1 Betfair Sprint Cup Stakes under @the_doyler, for @kevinryanracing 👏👏 pic.twitter.com/hYxhSGWYFn

Produced a massive effort when easily winning Stewards' Cup at Glorious Goodwood last season but disappointed all 3 starts at this level, including twice here. Soft ground would be a concern.

Khaadem charges to victory, becoming the third three year old in five years to win the race, for @cbhills and @JimCrowley1978, who scores a quick-fire double

Sprang a surprise in Champions Sprint over C&D final 3-y-o start (had an uncontested lead), and nowhere near that level in 4 starts last term. Not hard to look elsewhere.

Wow! Sands Of Mali (28-1) makes all to get the better of Harry Angel and cause a huge upset in the Champions Sprint at Ascot. 👏 #ChampionsDay #WhatAPerformance pic.twitter.com/1wHirtcrkX

Cost connections just £2,800 as an unraced 3-y-o but has an excellent pedigree and has rapidly developed into the highest-rated sprinter in Ireland, bolting up in listed race at Naas 12 days ago.

Showed plenty of speed over 7f/1m last season, notably when holding off Laurens in Group 2 at York in August. Doesn't have much to find on that form and drop back in trip potentially a good move.

It's a tight finish to the @SkyBet City Of York Stakes, but SHINE SO BRIGHT just holds off a gallant effort from Laurens to win for James Doyle and Andrew Balding 👍#ClassicEbor pic.twitter.com/qQjgNDPpaa

Grand servant to connections, and 2 of his 3 Group 1 wins have come over this C&D, including this event in 2017. However, his second to Hello Youmzain in Sprint Cup was his only good run of 2019.

What a season @oismurphy is having! 🔥🔥🔥

Yet another Group 1 and Series success with THE TIN MAN @haydockraces pic.twitter.com/2TjDdJng1g

Progressive filly, winning 3 times last season, including when making all in Group 3 at Doncaster (7f). Good second back sprinting in Group 3 at Newmarket on return and this stiff 6f will suit.

Proved better than ever to win Prix de la Foret at Longchamp for the second season in a row in October. Good second in Champions Sprint here later that month and soft ground would increase her chance.

ONE MASTER wins back-to-back renewals of the (Group 1) Prix de la Foret at @paris_longchamp for William Haggas under man of the moment @PCBOUDOT!

Many are closely matched on their best form but SCEPTICAL has created a fantastic impression in a short space of time and can improve past his rivals. One Master was a close third in the Queen Anne at this meeting last season but this race looks more suitable and she rates a big threat, especially if conditions become testing, with Betfair Sprint Cup winner Hello Youmzain another to consider. 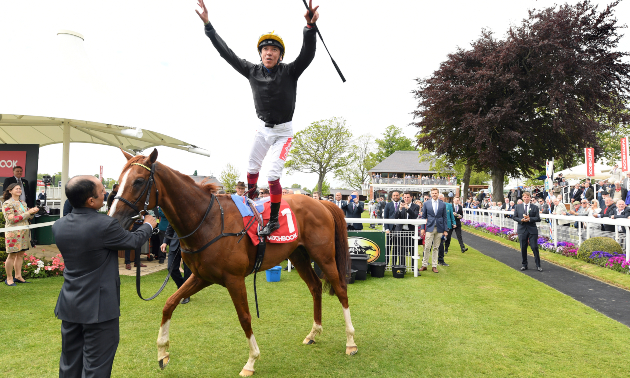