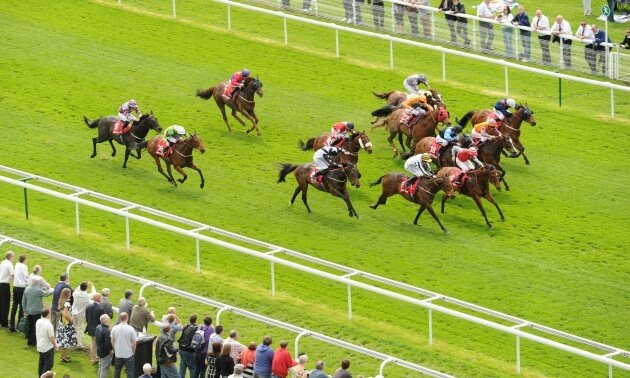 The former Michael O'Callaghan inmate made every yard of the running in a valuable race at York last weekend, with connections at the time lukewarm about turning him out again quickly.

However, his 5lb penalty means he sneaks into the 28-runner cavalry charge and since he has been raised 7lb for his all-the-way win, he is 2lb ahead of the handicapper.

Victory Day (4/1F) rallied well towards the line, but was just denied by the eventual winner

"With scraping into the race with his penalty, we've decided to give it a go," said Carroll.

"He's clearly in great form and has come out of the York race very well.

"The forecast was in our favour and given it is almost the last race of the meeting, it gives him as much chance as possible to get over the York race.

"It's exciting and hopefully it pays off."

At the other end of the scale is Mick Appleby's Danzeno, who won for the first time in almost two years last time out.

The eight-year-old bolted up by six lengths and has the assistance of Frankie Dettori in the saddle.

"I think he's got a good draw in 17 and the ground should be spot on for him," said Appleby.

"The owners contacted Frankie to ride so that can't be a negative either, the way he's been riding this week.

"He's going there with a really good chance, I think."

He added: "It gave me a lot of satisfaction getting him to win last time at Nottingham after a bit of time in the wilderness. I don't think it was a great race, but he couldn't have won it any easier than he did.

"It was a good performance."

Jeremy Noseda aims to go out on a high as his last ever runner will be Cenotaph, ridden by Ryan Moore.

Jim Bolger has an interesting contender in the Argentinian import Southern Horse, while Gifted Master, winner of the Stewards' Cup, and Baron Bolt, who dead-heated for the Ayr Gold Cup, also line up.

Charlie Appleby's Space Blues is favourite for the Jersey Stakes on the back of two impressive recent wins at York and Epsom.

Happy Power holds claims as does Richard Hannon's Urban Icon, who finished a neck behind Space Blues last time out.

"Urban Icon looks a very good horse. He was very unlucky not to win last time in the Surrey Stakes on Oaks day, he should be very competitive," Hannon told Unibet.

In the Chesham Stakes, O'Brien's Lope Y Fernandez is a short price, while Appleby's Pinatubo, winner of the Woodcote at Epsom, is unbeaten in two races.

The Queen Alexandra sees Paul Nicholls' high-class chaser Black Corton line up in preparation for the Galway Plate. He will be ridden by the trainer's daughter, Megan.

Nicholls said: "Black Corton is going for the Galway Plate, and it would be nice to give him a run before it. This is just over a month before it and fits in nicely.

"I didn't really want to run him over jumps at this time of year, and Megan (Nicholls) came up with the idea over the weekend."

Willie Mullins' Max Dynamite is sure to be popular, with Ryan Moore taking the ride.