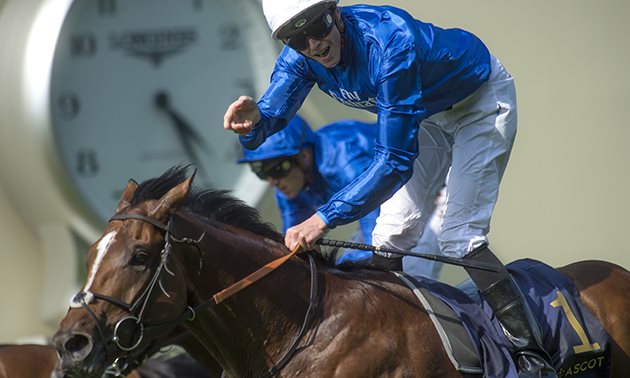 Pinatubo maintained his unbeaten record with an impressive display in the Chesham Stakes at Royal Ascot, breaking the juvenile track record in the process.

Having followed up his winning debut at Wolverhampton with victory in the Woodcote at Epsom three weeks ago, Charlie Appleby's colt was a 3-1 shot to complete his hat-trick in this seven-furlong Listed event under James Doyle.

The well-touted 5-4 favourite Lope Y Fernandez moved towards the front racing inside the final two furlongs, but Pinatubo covered the move and quickly asserted his authority - pulling clear to score emphatically by three and a quarter lengths.

PINATUBO makes it three wins from three runs with an impressive victory in the (listed) Chesham Stakes for Charlie Appleby and @the_doyler in the @godolphin blue!


Lope Y Fernandez was a clear second ahead of Highland Chief in third.

"I was quite confident throughout the race. He just goes out there and does his job."

Doyle added: "He's a horse that shows up nicely on the gallops without setting it alight.

"He's a very smart horse and he travelled well. He's not slow, but I'm sure up to a mile will be within his compass."

Appleby added: "We'll step up in class now, obviously. Something like the Vintage Stakes (at Goodwood) could be for him, the way he travels.

The National Stakes (at the Curragh) wouldn't be out of the question later."