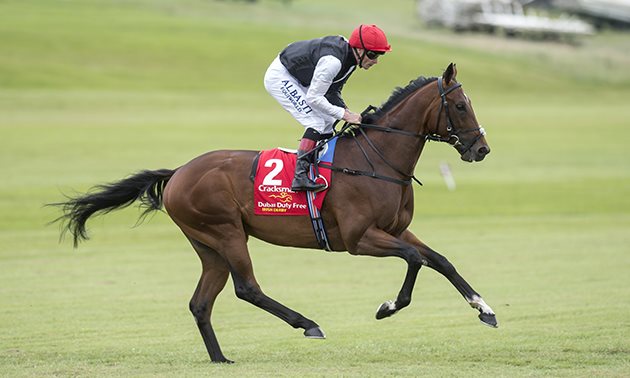 Owner Anthony Oppenheimer insists he is struggling to split his two runners in the Ribblesdale Stakes as Frankellina and Star Catcher take each other on.

Frankellina, trained by William Haggas, was narrowly beaten in the Musidora at York before finishing sixth in the Oaks two weeks later. A more conventional track is expected to suit her.

John Gosden's Star Catcher was just behind Sir Michael Stoute's Queen Power, vying for favouritism in this, in a Newbury Listed race. She is expected to improve further for the step up to a mile and a half on Thursday.

Frankellina wins on debut for trainer William Haggas at @GTYarmouthRaces, in the Cracksman colours!

Add her to your trackers here 📝> https://t.co/vbLQoqXAG2

"I honestly don't favour one over the other, and that is why we are running them both," said Oppenheimer.

"When Star Catcher was beaten at Newbury, Frankie Dettori came back and apologised because he felt he should have won; he said he should have made more use of her - because she was running on again at the line, she finished full of running.

"She should be really suited by stepping up in trip - that is what we are hoping.

"Frankellina had the two quick runs in the Musidora and the Oaks - but she did a really nice piece of work the other day, which is why we are keen to run her.

"I'd absolutely think Ascot should suit her more than Epsom, because she is a big filly."

He said: "I think they are much of a muchness, but I am happy with all three of them.

"They will run well, but I think Fleeting will take a lot of beating. Star Catcher was coming back at Queen Power last time at Newbury and she will appreciate the step up to a mile and a half."

After winning the St James's Palace Stakes with the supplemented Circus Maximus, Aidan O'Brien will be hoping lightning can strike twice with Fleeting - who was added to the race following her fast-finishing third in the Oaks. Peach Tree lines up for Ballydoyle, too.

The Hampton Court Stakes is a fascinating affair, in which Classic form mixes with handicappers.

"It's a shame Gerald Mosse can't keep the partnership intact. But Jamie (Spencer) is the third most successful jockey at Royal Ascot still riding, so I think we've got a pretty good substitute.

"He's a very exciting horse. He arguably should have won the Derby trial at Epsom, and then he didn't stay in very deep ground at Lingfield, but he ran very well for a long way.

"Coming back to a mile and a quarter on better ground, I'm expecting him to run a big race."

Abdullah's racing manager Teddy Grimthorpe said of the former: "His work has been solid. Sir Michael is bringing him in great shape.

"We have always had it on our mind that he might be a mile-and-a-quarter horse, even from when he was a two-year-old, so this is an interesting opportunity for him.

"His run at Sandown (third to King Of Comedy) has suggested he wants this trip, as has his work at home. It is a hugely competitive race."

Sangarius carries the famous colours' pink cap to distinguish first-string status - but it is Headman who is bidding to follow the path trodden to Royal Ascot success by his owner and trainer's Time Test back in 2015.

Grimthorpe said of Headman: "He is going what I call the Time Test route, having won with a larger weight in the London Gold Cup. Everything he has done since that victory has pleased Roger.

"This was always the race in mind we had for Headman after Newbury. You never quite know how much is between them.

"We've put the pink cap on Sangarius - mainly because he has Listed form, which Headman hasn't. But Headman is also by Kingman, which is important to us."

In the Norfolk Stakes, Sunday Sovereign will be a short price to provide Paddy Twomey with a first Royal Ascot winner - having already beaten Coventry hero Arizona earlier in the season.