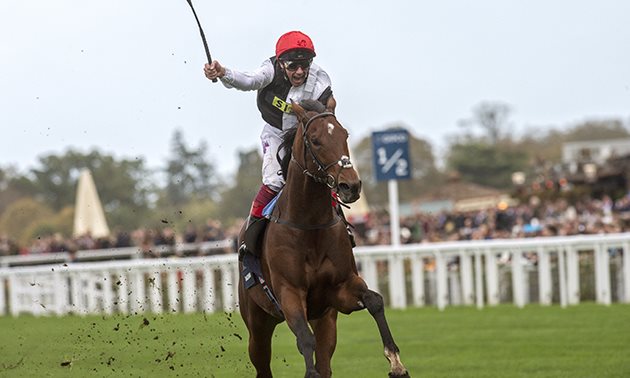 Frankie Dettori made it three from three on the third day of Royal Ascot as he steered Star Catcher to victory in the Ribblesdale Stakes.

Having landed the Norfolk Stakes on board A'Ali (5-1) and the Hampton Court on Sangarius (13-2), the popular Italian was 4-1 to complete his hat-trick aboard the John Gosden-trained Star Catcher - who finished a close-up third behind the reopposing Queen Power on her latest outing at Newbury.

Always in the perfect position in behind the pacesetters, Star Catcher travelled smoothly into the home straight and had enough in hand after striking the front to hold Aidan O'Brien's fast-finishing 7-4 favourite Fleeting at bay by a length and a half.

3 rides 3 winners for Frankie Dettori at #RoyalAscot as he partners STAR CATCHER to victory in the (Group 2) Ribblesdale Stakes!

Gosden said: "He rode the first winner for a great friend of mine (Simon Crisford) in the Norfolk, then Stoutey (Sir Michael Stoute) produced his horse beautifully and we planned this after she won her maiden in April.

"This 47-year-old kid (Dettori) take this to another level, like a Wimbledon semi-final and final. He's riding quite beautifully. He occasionally listens to me, but not too much.

"She broke her maiden at Newbury and Frankie came straight off and said don't run her in the Oaks, go to the Ribblesdale. He said she's not got the strength for the Oaks. He was proved right and we planned this all along.

"They went too slow in the Listed race at Newbury and Frankie said she'd stay, don't worry about it. She ran a nice race.

"She's done well. It was one of those things not to be tempted by the Oaks and wait for the Ribblesdale."

Dettori said: "Having the first three winners on Gold Cup and Ladies' Day, it can't get any better than this."

O'Brien said: "We are very happy, she ran very well and it was a good run we thought.

"She has come from a long way back, but I think she probably wants better ground. She is a nice ground filly and it was much better in the Oaks. It was tough going out there, but she ran well.

"On soft ground a mile and a half is far enough, she doesn't want to go any further. We will see how she is and how she comes out of it."