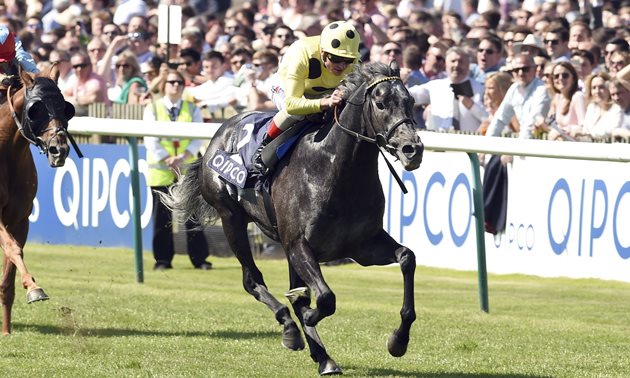 Defoe backed up his Coronation Cup success as he fended off Czech raider Nagano Gold in a dramatic renewal of the Hardwicke Stakes.

Sent off the 11-4 favourite, Defoe had to dig deep for Andrea Atzeni as Nagano Gold was flying at the finish for Christophe Soumillon, being beaten just half a length at the line.

The runner-up could be counted as unlucky as he was involved in an incident at the start when last year's Derby hero Masar stumbled badly coming out of the stalls, nearly unseating Doyle.

He managed to recover his reins, but Nagano Gold was caught behind, being brought to a virtual standstill.

DEFOE strikes under @Atzenijockey for @varianstable to land a dramatic renewal of the (Group 2) Hardwicke Stakes at #RoyalAscot!

He's taken his form to a new level this season 👏


Atzeni was delighted to win the Group Two event though, and said: "It's great. It's a tough week and hard to get winners. He's very straightforward.

"It's great for the owner as he's here today and has been here all week."

Trainer Roger Varian added: "I'm delighted, it's a special moment. He's a good horse who's getting better as he gets older and I'm delighted for the winner.

"He's a gentleman of horse, very straightforward and one of my favourites. (The King George) must be on the radar now."

Masar went on to run with credit on his first start since the Derby, before tiring from the furlong pole.

Doyle said: "He tripped over coming out of the gates, which is obviously not ideal in a race like this, but that's horse racing. It's annoying, but we'll move on."

"I don't really know what happened (at the start of the race), but just as the stalls opened his nose disappeared.

"Luckily when he came up he hit me in the chest and put me back in the saddle. It's not the start we want in a race like that, but what can you do?

"We ended up a bit far back and they didn't go quick and we just got caught for a bit of speed in the straight, but he ran well and has been off for over a year - it was a nice run.

"Hopefully he comes out of it in one piece and we'll go again."

Appleby said of Masar: "I'm delighted to see him back. We had a little bit of a mishap with a bit of a stumble out of the gates and therefore it didn't materialise quite how we wanted it to.

"We would have liked to have been placed a bit further forward. James (Doyle) was rather forced into a situation there. They have gone a sensible gallop, but as you saw he was a bit fresh and over-raced in the first quarter of the race."

He added: "Without speaking to His Highness (Sheikh Mohammed) yet, I'd imagine something potentially like the Juddmonte International, as I wouldn't mind coming back in trip.

"For me he has still got plenty of boot there."