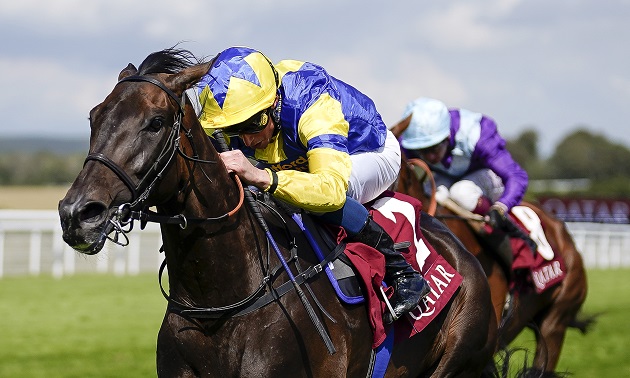 Wonderful Tonight added to her growing reputation when successfully conceding a penalty in the Qatar Lillie Langtry Stakes at Goodwood.

David Menuisier’s stable star already has two Group 1s on her record and was racing in Group 2 company having been a late absentee from last weekend’s King George VI And Queen Elizabeth Stakes at Ascot on account of the fast ground.

Menuisier, who does not train too far from Goodwood at Pulborough, agonised over that decision – but with £170,000 on offer to the winner of this race just seven days later, it is hard to say he made the wrong call.

Wonderful Tonight thrives on soft ground, but she made life a bit harder for herself than it might have been by refusing to settle in the early stages for William Buick.

Buick – who gets married on Sunday – tracked Makawee until three furlongs out, at which point he could not see any merit in restraining his mount any further.

She quickly went three lengths clear, but on entering the final furlong began to think she had probably done enough for the day and started to idle.

Tribal Craft closed up, but the 4-5 favourite was always holding her and prevailed by two lengths.

The daughter of Le Havre was left unchanged at 8-1 for the Prix de l’Arc de Triomphe by Betfair, a race back down at 12 furlongs and one which Menuisier has repeatedly stated has been her big aim all season.

“You kind of have to break her stride the whole way as she wants to go. She probably has more speed than last year. You could probably get away with dropping her down in trip, rather than stepping her up.

“She will probably have a run in the Yorkshire Oaks or at Deauville next. She will then go for the Vermeille or the Arc.”

Buick said: “She doesn’t need to be running over this trip again.

“To be honest, she races how she always does, she’s energetic and I was delighted to get a lead on her. We went slow and she took it up a fair way out, but she has stuck on all the well to the line.

“She’s got a bit stronger since last year and with that she’s probably got a bit quicker. This trip probably stretches her a bit now, but she’s very good so she’s got the job done.”

Wonderful Tonight is owned by music mogul Christopher Wright, who said: “We’d like to get a couple more runs into her before the big day if we can.

“There’s the Yorkshire Oaks, which is going to be a tough race, and depending on the ground there is the Prix Pomone at Deauville the same weekend, those are possibilities. Then I suppose you have to look at the Vermeille, which she ran in last year and was beaten a couple of lengths, but the ground was pretty fast that day.

“That is the tentative schedule – the Yorkshire Oaks or the Prix Pomone, primarily ground dependent rather than competition dependent.

“And then possibly the Prix Vermeille and then the Arc.”