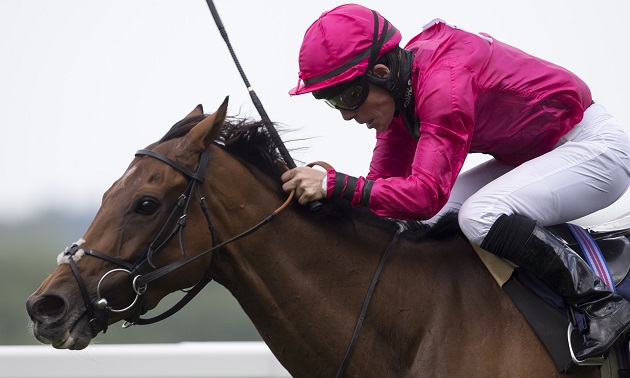 Emma-Jayne Wilson has her eye on the Silver Saddle trophy and another success for the Ladies team as she prepares for Saturday’s Shergar Cup meeting.

A champion apprentice jockey in both America and her native Canada, Wilson has won an array of top-level races in her homeland and in 2007 took the Queen’s Plate aboard Mike Fox, a Classic race that makes up the first leg of the Canadian Triple Crown.

In England the rider has become a regular at the Ascot meeting, competing six times at the event since its inception in 2000 and leading the Ladies team to victory in 2015.

“I’m very excited, I love coming over,” she said.

“My family is from Britain and it feels a bit like a home away from home. The Shergar Cup is definitely one of my most favourite events of the year, it has a different atmosphere and a different way of going.

“I’m very excited to internationally travel, pandemic aside, and get back to this event.

“They really do know how to make it work, attracting some top horses and some of the best jockeys in the world.

“The way they set it up with the draw, it definitely gives everybody a fair chance. I’ve had some success but you need a little bit of luck when it comes to the draw, but everybody has an opportunity to really showcase what they’re about.

“It’s very well done and winning it is not an easy task.”

Last season the Ladies team were triumphant for the third time when led by competition stalwart Hayley Turner, with teammate Nicola Currie taking the Silver Saddle trophy given to the leading individual rider.

Wilson was not part of the team as coronavirus restrictions interrupted travel, but this year she will be reunited with both Turner and Currie and joined by debutant Joanna Mason as the teams have been expanded to four riders this time around.

“You can get a chance to show everybody what you can do, I’ve ridden with both Hayley and Nicola in the past, but I don’t believe I’ve ever ridden with Joanna before,” she said.

“It’ll be a pleasure to meet her and hopefully we can take home the trophy as a group.”

Though a three-time winner of the team event, the Silver Saddle has eluded Wilson and she came closest to landing the individual title in 2014 when narrowly beaten by Olivier Peslier.

“A couple of tournaments back I was pretty close to winning it myself, Mr Peslier had an unbelievable way of racking up points – he was just managing placings in every race,” she explained.

“Even though I had a couple more winners than he did he was still able to steal it from me, so I’d definitely love to get the leading point-earner trophy – that is really something that I’m gunning for.”

This year’s event is expanded not only in the number of riders on teams, but also in terms of prize money and the number of runners and races on the card.

It is this willingness to experiment and adapt that Wilson admires about the team behind the event and the rider has seen many changes to the format since first taking part.

“Ascot really know to do it, they’re not afraid to shake it up and adjust the system,” she said.

“They try to make it better and if it doesn’t work, they’ll change it back to what they know works. They’re always adapting and trying to push the envelope, make it bigger and better.

“The first Shergar Cup I was involved in had two teams and eight jockeys, they’re constantly looking for ways to make it better.

“It’s about the fans, it’s something a little bit different from the everyday race day.

“It’s an enjoyable event for everybody, absolutely everybody, including myself. Let’s hope the Ladies team comes out on top!”

Kerrin McEvoy is also relishing the opportunity to return to Ascot as part of the Rest of the World team.

The Australian is no stranger to riding on British turf, of course, having spent five years as Godolphin’s number two rider on these shores.

During that period McEvoy rode 10 Group One winners in Europe, including a Classic success aboard Rule Of Law in the 2004 St Leger at Doncaster.

Appearances in Britain have been relatively infrequent since returning to his homeland, but he is delighted to be making his third appearance in this weekend’s midsummer team competition.

He said: “It’s always good to be back. If you can get to Ascot and have a couple of rides, it’s always exciting – it’s a great place to go and compete.

“This will be my third Shergar Cup. I rode a winner for Robert Cowell (Secretinthepark, Dash in 2015) and the last time I rode in it was in 2017, so it’s been a while.

“I did come back to the UK to ride here in 2019 for a period of four to six weeks and it’s great to be back in town.”

McEvoy has ridden three Royal Ascot winners, albeit the most high-profile of those – Shamardal in the 2005 St James’s Palace Stakes – was run at York while Ascot was being redeveloped.

Since returning to Australia he has cemented his status as one of the world’s top jockeys – riding more than 2,000 winners Down Under, including 80 Group Ones and three Melbourne Cups, the most recent of which came aboard Charlie Appleby’s Cross Counter in 2018.

He is joined on the Rest of the World team by French maestro Christophe Lemaire, Japanese ace Takeshi Yokoyama and New Zealander Jason Collett, who McEvoy is used to competing against rather than with.

He added: “I haven’t had a good look yet, but it looks like I have a nice chance for David Simcock in the first and I’m happy with the rides I’ve got.

“I think we’ve got a good team. Jason Collett is in career-best form and has been riding exceptionally well, Christophe Lemaire is very well known and we’ve got Takeshi as well, so we’ve got a strong team.

“I have some fun memories of riding at Ascot and I’m looking forward to adding to that at the weekend.”