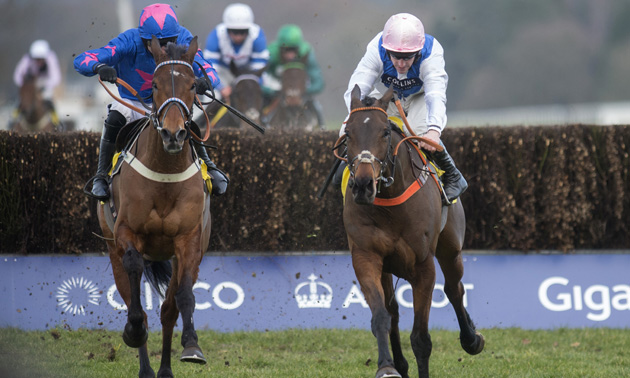 Ruth Jefferson describes Waiting Patiently as “a joy and a headache to train” as she prepares for his latest attempt at big-race glory at Ascot.

It is coming up to five years since the Flemensfirth gelding broke his duck in a minor novice hurdle at Sedgefield for the now-retired Keith Reveley – and it is fair to say he has had a rollercoaster career ever since.

Having looked a superstar in the making after winning his first five starts over fences for Malcolm Jefferson, he made it six on the bounce with an emotional success in the 2018 Ascot Chase, a Grade One triumph which came just a couple of weeks after his popular trainer’s death.

A whole host of injuries have meant Jefferson’s daughter Ruth has managed to get her aptly-named stable star to the racecourse on just five occasions in the subsequent three years, but she has no doubt he is worth all the effort.

Speaking on a call hosted by Great British Racing on Thursday, Jefferson said: “He’s a remarkable horse really. I know he’s not young any more, but he’s not run much and doesn’t think he’s old.

“He comes back time and again, and runs his race. You can’t really ask for more than that, but I would like another Grade One on his CV.”

Detailing some of the problems Waiting Patiently has endured, she said: “He had a bone spur that put him out of the Arkle as a novice chaser – then the following season he was due to go to Cheltenham in November, December and January and had a lung infection.

“After he won the Ascot Chase he got a touch of a leg injury, and we didn’t know if we were going to get him back, and since then we’ve had a chip that needed removing and a lung infection was resistant to 16 of 17 antibiotics it was that rare!

“He’s just that sort of horse. There’s always something with him, and you don’t know what’s coming next, but he’s worth spending the money on because he always comes back at that level.

“He’s a joy and a headache to train. I’m not sure I’ve got another one like him in the yard at the moment – they’re not easy to come across when you’re someone like me.”

Waiting Patiently most recently proved his considerable ability remains very much intact when storming home to fill the runner-up spot behind Frodon in the King George VI Chase at Kempton – his first competitive outing in 12 months.

Jefferson had not even entered her charge for Saturday’s Matchbook Betting Exchange Clarence House Chase, but decided to supplement him earlier this week at a cost of £5,000, such is his well-being.

“He came out of the King George really well,” she added.

“I had to ride him out two days later, because he’s quite an aggressive horse in his stable and he was going to hurt someone if we didn’t do something with him.

“It came up in conversation with Richard (Collins, owner) that the Clarence House was coming up, and it was a shame we hadn’t put him in. He texted me a few days later and said ‘what do you feel about supplementing him’?

Given Waiting Patiently’s injury record, it is hardly surprising Jefferson is none too keen in looking beyond this weekend’s assignment.

He has been entered for the Queen Mother Champion Chase, the Ryanair Chase and the Gold Cup at the Cheltenham Festival in March, but his trainer is in no rush to make running plans.

She said: “Straight after the King George Richard rang me up and said ‘we’ll go for the Gold Cup’, but that was literally within 20 minutes of the race and he was very excited to have a Gold Cup contender.

“Five days later he wasn’t quite as convinced and didn’t want to give him a Gold Cup entry, but I said it would make me happy to enter him, and he agreed.

“We’ve put him in everything, because it’s still seven weeks until Cheltenham and I don’t know what the ground is going to be, what’s going to turn up and what’s going to pay the cost to come from Ireland. Why rule it out now when we’ve got seven weeks to think about it?

“The horse is versatile, and we can let the ground decide which way we go, rather than getting excited one way or the other.”

Brian Hughes has been ever-present in the saddle during Waiting Patiently’s 11-race chasing career thus far – and he remains the champion jockey’s only Grade One winner to date.

Hughes said: “He’s an extremely talented horse and extremely versatile. He’s not overly big, but he’s very strong and muscly – and no matter what the trip is, he runs his race.

“We feel he doesn’t get the credit he deserves, because he’s a northern horse, but he’s a very good horse and has run very good horses to small margins when he’s been beaten.

“Hopefully he shows up again on Saturday, and I’m confident he’ll put up a big show.”

Hughes, who again leads this year’s title race, would love to showcase his talents more on the big stage, and believes his top-level opportunities are more limited because he is based in the north.

He added: “It’s brilliant when you’re riding lots of winners, but when you look back at your career when you’ve finished, you’d like to have a few big races on your CV.

“I’m lucky to have a horse like Waiting Patiently, but I’ve only got one of him – whereas other jockeys have 10 Grade One horses to ride.

“I feel there’s a lot of good trainers, owners and jockeys in the north, and we sort of seem to get looked upon as second-class citizens sometimes. I thought me being champion jockey was something everyone in the north could take a bit of credit for.”