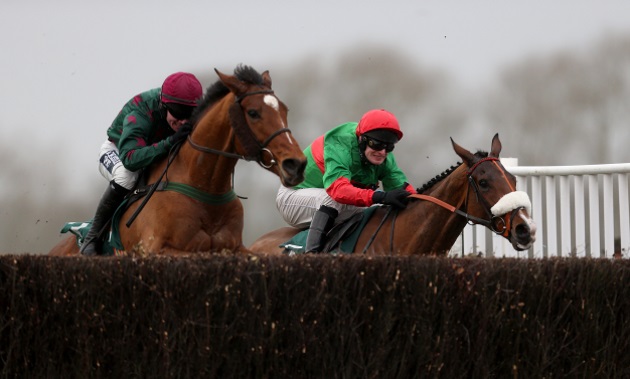 Two For Gold rallied in admirable fashion to deny Dashel Drasher in the Fleur De Lys Chase at Lingfield.

Kim Bailey’s nine-year-old pipped Jeremy Scott’s stable star to take the £78,045 first prize at odds of 10-1 in the hands of David Bass.

After jumping the last with a narrow lead, Two For Gold was headed in the final 100 yards by Dashel Drasher but fought back bravely as the winning post approached and got back up to get the nod by a short head.

Dashel Drasher had cut out most of the running after taking over Lieutenant Rocco and Bristol De Mai, who were the first to go on.

Lieutenant Rocco harassed Dashel Drasher for much of the journey, but he was the first beaten. Master Tommytucker was creeping into the race when he took a bad fall at the third-last fence and it was subsequently confirmed he had tragically suffered a fatal injury.

With Itchy Feet never able to get in a blow, it was left to Two For Gold, Dashel Drasher and Bristol De Mai to fight it out. The latter had to settle for third place, three-quarters of a length behind the first two, who served up a thrilling finish.

“I said to my assistant this morning that we need a horse to rescue us this season and what is the chance of this happening today,” said Bailey.

He is funny old horse. He is a quirky individual and he has given the owners a huge amount of fun.

“When they announced this race, we said straight away that this was the race we wanted to go for. He loves soft ground and this meeting has been abandoned enough times to work out it was going to be heavy ground, which would suit him.

“He has done his job for the season if that’s the case. We’ll find something else for him, but he is a tremendous horse.”