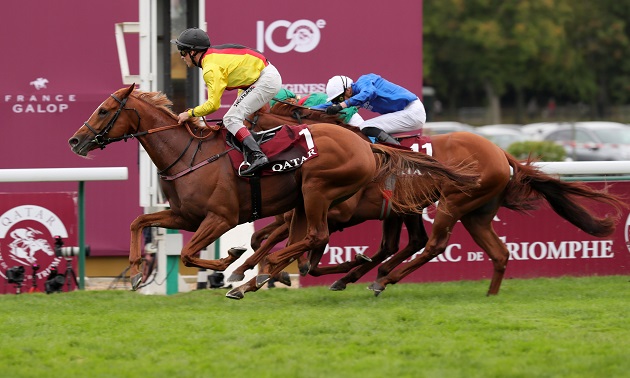 Torquator Tasso pleased both trainer Marcel Weiss and jockey Frankie Dettori in a final piece of work before he tries to retain his Prix de l’Arc de Triomphe title.

Torquator Tasso has been the long-term mount of Rene Piechulek, who steered him to victory last year but is retained by the owner of ParisLongchamp rival Mendocino, who is, incidentally, trained by his partner Sarah Steinberg.

Those allegiances left the door open for Dettori, who rode the five-year-old for the first time when coming home second behind the aforementioned horse in the Grosser Preis von Baden earlier in the month.

Ahead of Sunday’s contest, the duo joined forces for a final pre-race workout, with Weiss reporting the chestnut to be in the same vein of form as he was prior to last year’s victory.

“There was a symbiosis between the jockey and the horse, they were in harmony.

“Immediately after Baden-Baden the decision was made that Frankie would ride him in the Arc, Frankie agreed to that and we kept our word.

“Judging by the work he did, he goes into the race in the same form he did last year.”

The race has attracted a large number of entrants this year, with the prospect of France Galop having to eliminate those with the lowest ratings more than a maximum field of 20 is declared.

“I’m hearing this for the first time right now, but I think it is a legitimate decision by France Galop to limit the Arc to 20 horses,” Weiss said of the ruling, which does not put his horse’s participation in jeopardy.