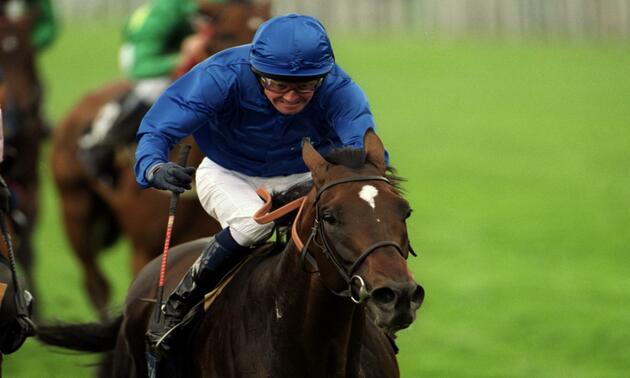 After starting life with Sir Michael Stoute, Kayf Tara was transferred to the care of Godolphin’s Saeed bin Suroor at the start of his four-year-old campaign, eventually bowing out the winner 10 of his 15 career starts, including two Gold Cups and two Irish St Legers.

He retired in 2000, going on to stand as a stallion at Overbury Stud, where he produced a sizeable list of top-class jumps performers and was crowned champion National Hunt sire on 11 occasions.

Thirteen-time winner Thistlecrack is his highest prize money earner to date having landed five Grade Ones, with Alan King’s Edwardstone his most prominent son in action as he recently took the Tingle Creek at Sandown by nine lengths.

Declining fertility meant the stallion was retired from the covering shed in 2020 and he spent the remaining years of his life in the paddocks at Overbury, where he died peacefully at the age of 28 on Wednesday morning.

Stud manager Simon Sweeting said: “This is a very sad day for all of us at Overbury. Kayf Tara really put us on the map and I feel incredibly fortunate to have been with him through every step of what transpired to be an extraordinary career as a jump stallion, in which he won more championships than any other British National Hunt sire in history.

“I remain immensely grateful to Sheikh Mohammed and the Darley team for entrusting him to us. He’s been such a great servant to the National Hunt game and to Overbury Stud, where he was looked after for most of his time by Dan Matty. We will miss him terribly.”

Sam Bullard, Darley’s director of stallions, added: “We are all very grateful to Simon Sweeting and his team at Overbury for taking such great care of Kayf Tara for all these years, and we are very proud of the enormous contribution he has made to National Hunt racing and breeding in Britain and beyond during that time.”