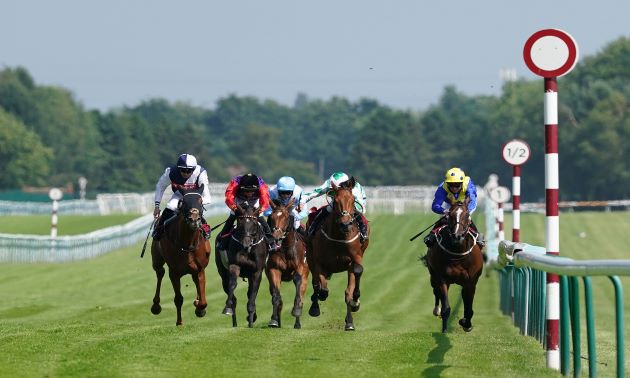 Every week, we’re using Timeform Race Passes to pick a Placepot for the headline card. Get our tips and best bets for Saturday at Haydock, including the (Group 2) Temple Stakes.

To make our Placepot selections – available below – we’ve used the Timeform ratings, Flags, Pace Map, Analyst Verdict and form archives – all of which you can access with Timeform Race Passes. Not a subscriber? Try it out with our Free Daily Race Pass, which is the feature race of the day, the Silver Bowl Handicap, due off at 14:35.

A case can be made for plenty in this competitive looking opener, but the one we're going to side with is the Philip Kirby-trained CARLOS FELIX. The son of Lope De Vega looks to be on a handy mark at present, and comes into this race on a run of three consecitive placed efforts on the All-weather. He has just 3lb to find on the Timeform weight-adjusted ratings, and in a race where there looks to be a few keen to press on with things, he looks like he could be given a nice passage into the race under Ben Curtis. He makes appeal in the opener, and with three places to play for, hopefully he can get the ball rolling for us.

The market has VALLEY FORGE only third favourite at the time of writing, but he’s 2lb clear on our adjusted ratings and shaped better than the distance beaten suggested when 5th on his season debut last time, leaving the impression he’ll be sharper for the outing. He had excuses the time before on ground that was firmer than ideal, and whilst he’ll probably need one of these to take the initiative and give him a proper pace to aim at, he’s no sluggard and could still put in a good finishing effort. Indeed our reporters are keen to point out that we’ve not necessarily seen the best of him yet, mentioning he may be the type to do just enough in front, and he’s interesting over this longer trip.

No prizes for originality with this selection, but it's difficult to oppose the John & Thady Gosden-trained MIGHTY ULYSSES. Winner of two of his three starts today, he ticks plenty of boxes coming into this. Firstly, he sets the standard on our weight-adjusted ratings, whilst having the Timeform small 'p' attached to his rating, which denotes there could well be more to come from him. Additionally, he flags as a 'Horse in Focus' following his 4 1/2 length success in novice company at Newmarket earlier this month, with the Timeform analyst reporting that he "remains open to further improvement and is well worth his place back in better company".

Another plus for his chances is that this race looks likely to be ran at a strong gallop, and ridden just off that pace can hopefully enable him to pick off his rivals in the run-in, under the excellent 5lb claimer Benoit De La Sayette. He's a confident selection here, and can provide another success for his handler who scored in this race back in 2019.

The market have Go Bears Go as favourite, whilst second-fav El Caballo looks the one to be behind on bare form, impressive last time out (carries Horse In Focus Flag) and his yard going great guns at the moment. However, we’re going to take a chance on BEAUTY INSPIRE at a much bigger price, well into double figures currently, one who makes the ferry crossing for another ‘Hot Trainer’. In all likelihood he’ll need to find 10lb or more to figure, but having been off for ten months he’s hugely unexposed in comparison to this field, and the only one to retain his Timeform ‘p’, value for extra on both his runs, and indeed wins, to date. Crucially, if held up as expected then – unlike the two at the head of the market – he looks likely to get the run of the race, an ‘extreme’ tempo predicted from our pace map data.

We'll keep this one short and sweet. WINTER POWER has a good record first time out, scoring on her return last season, and she can get back on the winning trail here for Tim Easterby. Winner of the (Group 1) Nunthorpe Stakes at York last year, she's the class act in this race and sits a whole 9lb clear of the field. Hopefully she can dominate on the front end, before heading on to bigger things again, with her next stop being Royal Ascot.

Lots to digest here, but the straight six furlongs should reward the nous of the 15 jockeys involved, and with little separating the field on ratings, we’re drawn to the mount of course specialist James Doyle, LIL GUFF. She could only manage 7th last time, but it was hard to expect much better on the day given the depth of that race from a mark 2lb higher, and possibly deserves extra credit having done best of those racing prominently. A position tucked away in midfield looks likely to be the order of the day here, and she could hardly be in better hands. Sticking with the theme, the 5lb claim of Saturday’s booking, Benoit de la Sayette – a ‘Jockey Uplift’ – means JUSTCALLMEPETE is all the more likely to hit the frame, already 1lb ahead of the field. He was in receipt of the Horse In Focus Flag from our reporter after his last race, when finishing one place ahead of the aforementioned LIL GUFF. He shaped well, finishing with running left, and is “threatening to come good again soon”.