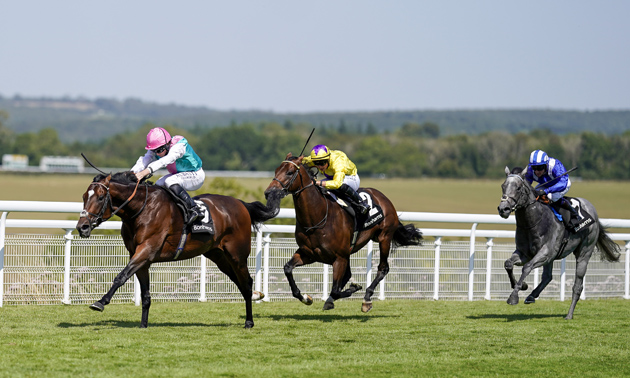 Every week, we’re using Timeform Race Passes to pick a Placepot for the headline card. Get our tips for Saturday's action at Glorious Goodwood.

To make our Placepot selections – available below – we’ve used the Timeform ratings, Flags, Pace Map, Analyst Verdict and form archives – all of which you can access with Timeform Race Passes. Not a subscriber? Try it out with our Free Daily Race Pass, which is the feature race of the day, the Unibet Stewards' Cup (Heritage Handicap) at Goodwood, due off at 15:40.

Plenty in with chances in the first race on Saturday's card at Glorious Goodwood, and we like the chances of the progressive SPIRIT OF BERMUDA, who can run another big race to make it a hattrick. Her winning performance at Newmarket earlier this month was backed up by the clock, and there could well be more to come from William Haggas's three-year-old. The daughter of Twilight Son has just 1lb to find on our ratings, so ticks plenty of boxes, and she gets the nod for us in the opener.

We move on to leg two, where we have the challenge of solving a big field sprint handicap. We're going to side with two against the field to try and conquer this.

First up is POWER OVER ME, who was first past the post on his most recent outing, only to have the race taken off him in the stewards room due to his rider weighing in light. He's got plenty of winning form to his name since making the switch from Joseph O'Brien to Robyn Brisland, and is right up with the principles on our weight-adjusted ratings. He's progressive but will need to take another step forward if he's to take this, though there is a good possibilty he can.

Looking at the Timeform Pace Map, it does suggest that there may well be a real pace burn-up, of which Power Over Me looks set to be firmly involved with at the head of affairs. As a result, our second selection comes in the shape of one who's likely to get a far more patient ride. Should there be a pace collapse, we're hoping that OPEN WIDE can capitalise by bursting into the places late on. The booking of talented 5lb claimer Saffie Osborne looks a great move by connections, and we're happy to give him a chance at a double figure price.

The standard setter on our weight-adjusted ratings, AADDEEY (120+) was an eyecatcher in the John Smith's Cup at York last time out, finishing his race strongly, and that hasn't gone unnoticed, with Timeform making him a 'Horse in Focus' off the back of that effort. Simon & Ed Crisford's charge couldn't land a blow that day, making his effort from the rear when left with too much to do. The step up in trip for this looks to be a positive, as does the potential strong pace in this contest, so hopefully he'll be able to make his presence felt at the business end of the race when picking off his rivals on the run-in, under a waiting ride.

Wonderful Tonight sets a lofty standard here but she’s set to go off odds-on and with three places on offer, we’re going to look for one to chase her home.

DIVINELY was firmly put in her place last time by her superstar stablemate Snowfall, but she kept on well there to take second close home and this daughter of Galileo promises to be suited by this step up in trip. It will take a huge performance to topple an on-song Wonderful Tonight, but it’s easy to see her running into a place in receipt of the weight-for-age allowance she gets from the rest of the field.

A typically fiercely competitive Stewards Cup, but William Haggas appears to have a cracking contender in HURRICANE IVOR. He’s a sprinter on the rise and was probably unlucky not to follow up his Sandown success at Ascot when drawn on the wrong side, a performance strongly suggesting he's ahead of his mark. He sits 3 lb clear of the field on Timeform ratings and a bold bid is expected.

One at a slightly bigger price to note is BIELSA for Kevin Ryan who’s already had a Goodwood winner this week with Last Empire. He promised a lot as a four-year-old before losing his way a bit, but he’s got right back on track this season and his last run at Ascot over 7f can be excused as the trip was just too far for him. He drops back to 6f here and is likely to go well with champion jockey Oisin Murphy riding for the first time.

An open looking maiden but it could pay to side with KHANJAR, who shaped with promise amidst inexperience when fourth at Ascot on debut and should prove a different proposition with that under his belt. He attracted support in the betting that day but looked in need of the experience, running green before not getting a clear run, and Jim Crowley takes over in the saddle now.