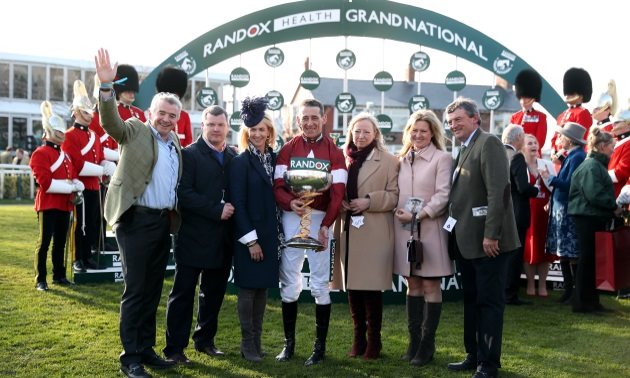 Tiger Roll is no better than "50-50" to bid for a historic third victory in the Randox Health Grand National after Gigginstown House Stud's Eddie O'Leary expressed his disappointment following the publication of the weights.

The Gordon Elliott-trained 10-year-old became the first horse since Red Rum to claim back-to-back renewals of the world's most famous steeplechase last April - and is the clear favourite to emulate Ginger McCain's legend by becoming a three-time winner in April.

However, Eddie O'Leary - brother of Gigginstown supremo Michael - has repeatedly stated Tiger Roll would only bid for another National win if connections were satisfied with his allotted rating, and the immediate reaction to his mark of 170 and the compression of the handicap was one of frustration.

Tiger Roll is due to make his first competitive appearance since his Aintree heroics of last spring in Sunday's Boyne Hurdle at Navan.

O'Leary told Sky Sports Racing: "Hopefully he comes through Navan on Sunday OK, then go on to Cheltenham and hopefully that all goes OK and if he's OK at Cheltenham then we'll make a choice.

"It (the weight) is a massive factor - we've said the whole way through this horse is on a very unfair rating. He was raised 12lb last year for winning a cross-country race. He was rated the far superior horse in the cross-country race, so why a 12lb rise in the weights? It was a reaction to the way he won the Boyne Hurdle last year, which was a surprise to all of us.

"The last time this horse ran in a (regulation) chase was two and a half years ago and he pulled up off 150. He's obviously improved for the Grand National discipline and cross-country, but to rate this horse as a winner of a Gold Cup is ridiculous."

O'Leary insists he has no problem with Tiger Roll being allotted joint top weight of 11st 10lb - alongside his Irish Gold Cup-winning stable companion Delta Work - but feels it is unfair that he must concede weight to a Cheltenham Gold Cup winner in Native River.

He continued: "Tiger Roll is a very, very special horse - but is he a Gold Cup horse? A genius like Gordon Elliott has never even considered entering him in the Gold Cup.

"We obviously would love to see Tiger Roll to go for three in a row, but we're very vocal about the fact that it (handicap) has to be compressed. It's only been compressed 1lb, which is a bit silly, so therefore we have a decision to make. The welfare of the horse we feel is far more important to us than the race.

"The Grand National is the biggest race in the world, it's bigger than any one horse.

"This horse loves the discipline - any horse competing around Aintree loves the discipline, they wouldn't be there otherwise. These horses come alive at Aintree over the fences, the absolutely love the discipline. It's not a welfare issue - he was always going to carry 11st 10lb, we understand that, but it's how he's compressed in regards to other horses.

"Native River - a Gold Cup winner - hacked up last Saturday. He's been compressed 2lb and we have to give him 4lb. I see something very unfair there."

O'Leary went on to raise the Betway Bowl, run on the first day of the Grand National meeting, as a viable alternative to the big race.

"The handicapper has his job to do and he's done it. We wanted more (compression in the handicap). The decision is now in our hands whether we run or not. Tiger is invaluable to us and we have to look after him," O'Leary added.

"He was definitely going to be entered in the Betway Bowl and probably the Punchestown Gold Cup. Hopefully he comes through the Navan test, he's coming back after a setback - he won't win, obviously, but if just pulls up with a smile on his face that will do us and then go on to Cheltenham and hopefully show us more there.

"Then we'll decide, but at the moment it's 50-50. The Betway Bowl is definitely coming into calculations now."

He said: "A blind man would know he's going to carry 11st 10lb. We were obviously hoping for a pound or two less, but Martin (Greenwood, BHA chase handicapper) and his team have a job to do.

"We're 4lb worse off with Magic Of Light, who was second in the race last year, so it's probably fair play - I'll not be giving out.

"Everyone has got their own opinion. If it's left to me he'll run. He's a household name and it's the most famous race in the world.

"The plan is to run at the weekend and we'll work back from there. Before Aintree he's hopefully going to have the chance to win at five Cheltenham Festivals. He's the horse of a lifetime, so if we can get him back to Cheltenham I'll be happy."

Tiger Roll and Delta Work are just two of 18 Elliott-trained entries for the Grand National.

Considering his running plans, the Cullentra handler added: "I'd say Delta Work would be an unlikely runner - he'll be aimed at the Cheltenham Gold Cup.

"I'd be looking forward to running Alpha Des Obeaux (10st 13lb), The Storyteller (10st 12lb) has a nice weight and Jury Duty (10st 8lb) could run well if he got some dry ground.

"There's Borice (10st) and Champagne Classic (10st 6lb) and Dounikos (10st 5lb). We have numerous other horses in the race and I think we'll run about half a dozen, but Tiger is the main one."

Last year's runner-up Magic Of Light (Jessica Harrington) has been handed 10st 12lb as she bids to become the first mare to win the race since Nickel Coin in 1951.

Walk In The Mill (10st 4lb) fared best of the British-trained runners when fourth 12 months ago. Robert Walford's stable star is also a dual winner of the Becher Chase over the famous fences.

Lucinda Russell's One For Arthur (10st 2lb) claimed National glory for Scotland off a mark of 148 in 2017 and will return to run off the same rating.