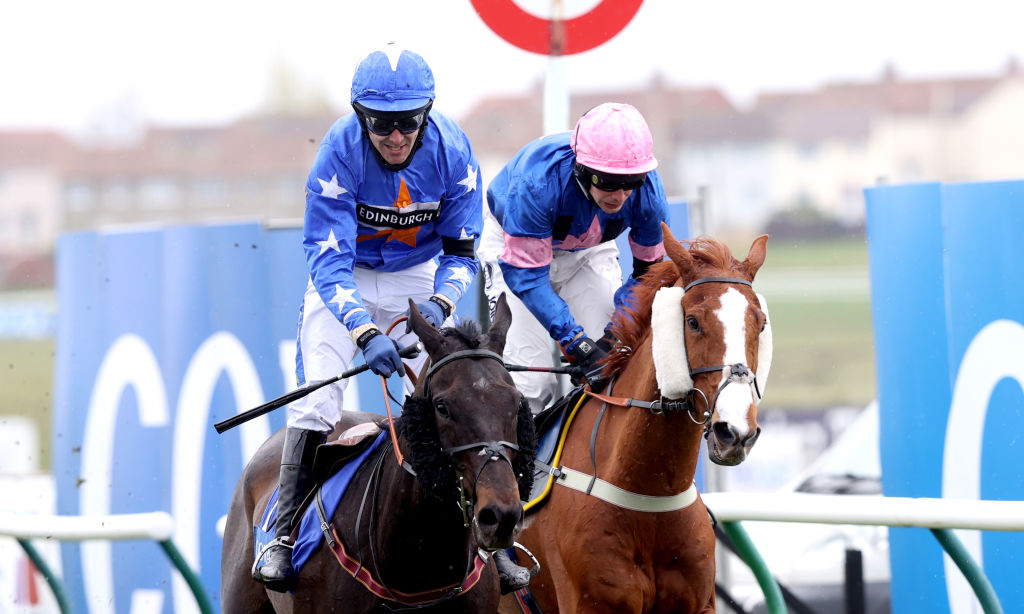 A week on from exciting stablemate Ahoy Senor annihilating his rivals at Newbury, the Kinross handler – who saddled One For Arthur to win the 2017 Grand National – is out to claim further big-race success on Merseyside.

Since his narrow victory in the Scottish equivalent at Ayr in April, Mighty Thunder has run just once – finishing fourth in the Charlie Hall Chase at Wetherby in October.

Russell expects that run to leave her charge spot-on for this weekend’s assignment and she has been encouraged by his schooling over a National-type fence at her Scottish yard.

“He seems in very good form. If he takes to the fences, he could run a very big race,” said Russell.

“The trip is probably a little bit short for him, but I think he’ll be fine on the ground.

“We chopped a tree down and built a fence at home and he jumped that fine.

“He was always going to need his first run in the Charlie Hall and I’m been pleased with him since.”

Four weeks on from winning the Grand Sefton Chase, Mac Tottie bids to complete a double over the National fences for the father and son team of Peter and James Bowen.

Bowen senior said: “It probably will be harder task and he’s got 7lb more to carry so it will be harder, but I think the trip will suit and he’ll be even better going a bit further. Fingers crossed he should go well.

“It all depends if he can cope with his handicap mark (142) and handle the step up in trip, I think he will.

“I’m looking forward to it, he’s so fit and well and everything has gone well for him since his last run.”

Snow Leopardess is a leading contender for Charlie Longsdon, having made a successful start to her campaign in a competitive handicap chase at Bangor last month.

“We’ve not had winning form over the National fences, but I think she would be the first one that has gone into a race over them in the top four in the market,” said Longsdon.

“She is in great form and with Chris’s Dream in there she will only carry 10st 4lb.

“There is no reason why, but her best form seems to be left-handed. The Grand National track is left-handed and in my eyes there should be no issues.”

The latter won the National Hunt Chase at the 2020 Cheltenham Festival and drops down in class after finishing last of five behind Frodon in the Ladbrokes Champion Chase at Down Royal.

“I think the demands of Aintree will suit, but obviously it is more April (Grand National) we are thinking about,” said Elliott.

“We’ll see how he takes to the fences on Saturday. Some trainers like to send them straight to the National without going over the fences first. Everyone is different, there’s no right or wrong way, everyone has their own opinion but I don’t think it does any harm to go over and have a little look.”