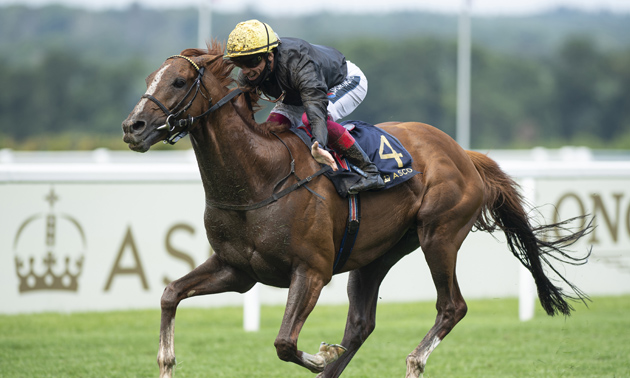 John and Thady Gosden’s star stayer Stradivarius has been retired to stud.

Owned by Bjorn Nielsen, he will now join the National Stud as a stallion.

The eight-year-old has run gallant races the last twice behind Aidan O’Brien’s Kyprios – a horse half his age – in the Gold Cup and at Goodwood.

Stradivarius was a late absentee in the Lonsdale Cup at York last month due to a bruised foot, with the horse taking longer than expected to recover from the problem.

The son of Sea The Stars retires having won seven Group One races, winning 20 of his 35 outings in total, earning almost £3.5million in prize money.

“He has been trotting and cantering but it has taken longer to get over the bruised foot than we thought,” Nielsen told the Racing Post.

“We felt it would be unfair to ask him to come back again as a nine-year-old next season after his enforced time off.

“It has been a fairytale from start to finish. Until this setback he had never been medicated and had never missed an engagement through injury.”

The eight-year-old has been sidelined since missing out on last month’s Lonsdale Cup, when a bruised foot forced his withdrawal on the morning of the race at York.

Nielsen reports the problem to have taken longer than anticipated to resolve and after consultation John Gosden, who trains the horse in partnership with son Thady, he has opted retire his star stayer to the National Stud.

He told Nick Luck’s Daily Podcast: “He took slightly longer to get over that foot bruising that he had when he was withdrawn on the morning of the Lonsdale.

“It would be hard to get him back now for Champions Day and John just thought it would be unfair really to put him through it again as a nine-year-old next year.

“He’s been the soundest horse – he’s never been medicated, he’d never missed an engagement in his career (through injury) and now to start training him with something that’s kind of there that wasn’t there before, it’s time to draw stumps.”

Stradivarius bows out as a seven-times Group One winner, encompassing three Gold Cups at Royal Ascot and a record four renewals of the Goodwood Cup.

The son of Sea The Stars had his final career start in the latter contest, running this year’s Ascot hero Kyprios to a neck – a performance Nielsen is happy to end on.

He said: “He’s had a fabulous career, he’s never – pardon the pun – put a foot wrong. He went out there beaten a neck at Goodwood. He ran a great race and he’s gone out at the top.

“I never wanted to see this horse finish running in fifth or sixth somewhere in a race next year, I’d much prefer to see him go out on a high. Of course I would love to see him go on for another eight years, but I think it’s time and time for him to see if he can produce anything near himself in the next few years, which I certainly hope he can.

“He will go to the National Stud and we’re very much looking forward to that.”

Stradivarius secured the last win of his career at York in May, when taking a third Yorkshire Cup, adding to three Lonsdale Cups on the Knavesmire and two Doncaster Cups.

His career spanned seven seasons and Nielsen thinks that fortitude is a key trait Stradivarius can pass on to his progeny.

He added: “His soundness has been one of his great assets. Having a sound horse is half the battle really, a horse that you can train and he’s certainly been that throughout. His tremendous will to win, his presence and he actually is a very fast horse.

“His times over the last two or three furlongs on all those big race days is very often the fastest of the day. He runs fast times and has a great ability to quicken, so I think all those things are attributes that any breeder would want to breed to. Hopefully he is going to get the support he deserves.”