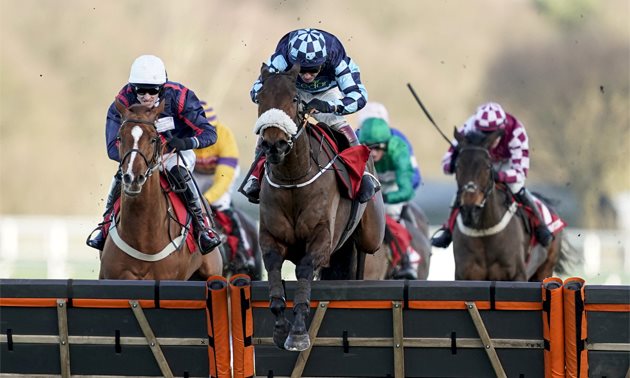 Olly Murphy saw his decision to put the chasing career of Thomas Darby on hold rewarded with a tenacious success in the Matchbook Holloway's Handicap Hurdle at Ascot.

After two unsuccessful starts over fences, last year's Supreme Novices' Hurdle runner-up made an instant impact on his return to hurdles, carrying top-weight to glory in the Grade Three prize.

Passing Song For Someone over the second-last the 8-1 winner found plenty for pressure to hold the late rally of the long-time leader by a length, making his first start over an extended two miles and three furlongs a winning one.

Murphy said: "We are back on track. I think the step up in trip certainly worked. I stand by my judgement, as I don't think this lad will be seen to his best until he is on a bit of nice ground and he didn't get that today or at Cheltenham.

"It was a good performance first time in a handicap off 151 - to do that on heavy ground around Ascot was no mean feat. Richard (Johnson) said he was still very raw babyish and green, so I think there is still more to come."

Supreme Novices' Hurdle runner-up THOMAS DARBY carries top-weight to victory on his return to hurdles at @Ascot for @O_J_murphy91 and @dickyjohnson77!

While not ruling out a return to chasing for Thomas Darby in the future, Murphy earmarked the Grade One Aintree Hurdle as his main target this season.

He said: "I don't think he is a Champion Hurdle horse and I broke the owner's heart a few days ago when I told him he worked like a slower horse than a two-miler.

"I think his main target will be the two-and-a-half-mile Grade One at Aintree. Whether we give Cheltenham a miss, I don't know, but he will have an entry in the Coral Cup and things like that. We will put chasing on hold this season.

"He is bred to jump fences and listen he has got his own technique and I still think he will be a nice chaser in time."