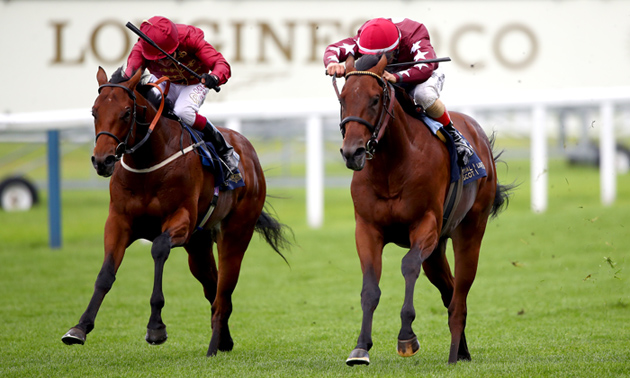 The Lir Jet is set for a Group One challenge in the Keeneland Phoenix Stakes at the Curragh next weekend.

He went to the six-furlong Prix Robert Papin at Chantilly following his Royal success and was a hot favourite in the hands of Oisin Murphy, but suffered a short-head reverse to fellow British raider Ventura Tormenta, trained by Richard Hannon.

Thrilling finish to the Group 2 Prix Robert Papin as VENTURA TORMENTA - bred by @kevinblake2011 - just gets up to deny Royal Ascot hero The Lir Jet for @rhannonracing! 🇫🇷pic.twitter.com/WT5qIchgtl

It had looked like Bell’s charge would go for the Nunthorpe at York, but the Newmarket trainer said on Saturday: “The Lir Jet worked well this morning. He is likely to go to Ireland now for the Phoenix Stakes as plans have been made to get him there.

“We were thinking of the Nunthorpe, but we thought while he is in great order we may as well give him another chance (at six furlongs). He just got beat in France on the nod and it was a case of one having its head up and the other having its head down.

“We could end up dropping back down to five with him, but there are no Group One two-year-old-only five-furlong races around and with the penalty he would have to carry in other races we thought it was sensible to try him at six.”

He added: “You can never rule anything out, but I would say it is highly unlikely he would run in the Nunthorpe as well, as he would have been to France and Ireland and then coming back for a Nunthorpe would be quite a lot for a two-year-old.

“If he was to win we would rest on laurels for a bit, if he finished a good second or third we could then look at the Flying Childers (at Doncaster).”