Temple Stakes: What they say 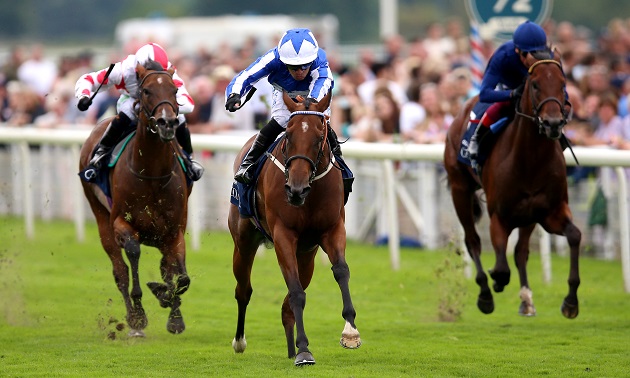 Nunthorpe heroine Winter Power is the star attraction in the Cazoo Temple Stakes at Haydock.

Tim Easterby’s Winter Power won three times over the straight five furlongs at York last summer, completing the hat-trick with a blistering display in Group One company in high summer.

She subsequently failed to fire in Ireland and also disappointed in a Prix de l’Abbaye run on bottomless ground in October.

With rain forecast on Merseyside conditions are likely to be on the soft side again for Winter Power’s four-year-old debut, but connections are optimistic about her chances nonetheless.

Alastair Donald, racing manager for owners King Power Racing, said: “We’re looking forward to seeing her back and this was the obvious race to go for.

“She ran on soft ground in the Abbaye, but I think we can forgive that run and as a two-year-old she won three times on soft, so we’re not too worried about the ground.

“She’s a very quick filly and it’s almost about reining in the speed sometimes – a few times she’s ran with the choke out a little bit.

“But I think in the slower ground it might just be able to keep her in a good rhythm early on, rather than going too quick.

“Tim is very pleased with her and says she’s bigger and stronger now, so fingers crossed we can look forward to getting her back to her best.”

Came From The Dark has already won three times at Haydock and is a leading contender for Ed Walker.

The six-year-old finished down the field on his reappearance in the Palace House Stakes at Newmarket, but Walker is hopeful a return to Merseyside will reignite the fire.

“Came From The Dark loves Haydock. We were very disappointed with his comeback run but he’s capable of throwing in a dud every now and again, so hopefully he can bounce back,” said the Lambourn handler.

“He’s in good form and this was always the target. My guys have done a brilliant job with him and they’ve got him back to soundness and in good form, so I think we’re on the straight and narrow.

“He’s fit, well and sound so hopefully we can get back on track.”

Ed Bethell’s Moss Gill has not managed to get his head in front in almost two years, but has filled the runner-up spot in four of his last six starts.

Ahead of his stable star’s first outing since September, Bethell said: “I’m very happy with him and he’s been training good coming into the race.

“We’ve all got a tall order taking on Winter Power, but someone’s got to do it and we’re on better terms than we were when we finished second to her in a Listed race at York last year.

“Obviously she’s improved and we’re now a six-year-old, so I’m under no illusions it’s a tough task, but at the same time we’re the joint second highest-rated in the race and he deserves to be there.

“As far as I’m concerned he’s as consistent a sprinter as you can find and fingers crossed he’ll run a massive race.”

Karl Burke has declared a trio of runners in Last Crusader, White Lavender and Attagirl.

Last Crusader appears the trainer’s main hope following an impressive display in the Westow Stakes at York last week, but his participation is ground dependent.

“We’re running him back a little bit quick after York, but there are not a lot of options over five furlongs for him in Group races, so as long as the ground doesn’t go on the slow side of good, and it does seem to be drying out there (Haydock), we’ll send him. If any rain came he could be a late scratch, but I think we’ll be going with him,” said Burke.

“I think he’s a high-class horse and a horse that has a great future and we’re not running for the sake of it, we’re running because there’s a lack of opportunities at five furlongs. He’s a lovely horse for the future and I’m sure he’ll be winning Group races later.”