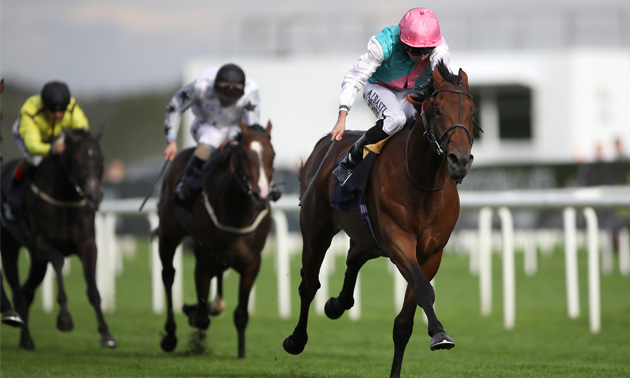 Teddy Grimthorpe has reflected on many happy memories as he heads to Royal Ascot for the final time as Juddmonte racing manager.

Grimthorpe has been in the role for 22 years but following the death of Juddmonte founder Khalid Abdullah earlier this year, he decided the time was right to stand down from the position.

Abdullah and Grimthorpe enjoyed huge success at the Royal meeting over the years, with Frankel’s 11-length demolition job in the 2012 Queen Anne Stakes and Banks Hill’s 2001 victory in the Coronation Stakes particular highlights.

Grimthorpe said: “I’ve had such a great time. I’ve enjoyed it all and I’ve been very, very lucky.

“I’ve had some great days at Royal Ascot. Frankel winning the Queen Anne was great and Banks Hill winning the Coronation was fantastic. Calyx and Three Valleys winning the Coventry was pretty special, too.

“With any winner at Royal Ascot, part of it is relief and part of it is you realise how difficult it is to get one winner there, let alone any more.

“When they all fall into place it’s fantastic, but in the end, you’ve got be grateful for what you get given.

“It’s a fairly select team (this year). Like all cases, I wouldn’t say we have an obvious banker, but we’ve got horses that should turn up and run really well.”

Maximal is the highlight on day one for the Juddmonte team as he contests the Group 1 St James’s Palace Stakes.

Trained by Sir Michael Stoute, Maximal has finished second on each of his two starts so far this year, including the Dee Stakes at Chester, but missed an intended run at Epsom’s Derby meeting due to the ground.

Grimthorpe said: “It’s going to be an ask for him. Obviously he didn’t run at Epsom because the ground turned against him. I would think unless there’s a thunderstorm it will be good, fast going on Tuesday, which he’ll certainly enjoy I would say.

“It will be a bit of a step up, but the (Abdullah family) are happy to let him take his chance – you can’t win if you’re not there.”

Sangarius is set to contest Wednesday’s feature, the Prince of Wales’s Stakes.

The five-year-old won the Hampton Court Stakes at Ascot in 2019, but has been limited to just four starts since, most recently finishing second in the Brigadier Gerard Stakes at Sandown last month.

“He’s already a Group 3 winner and a Listed winner and Sir Michael (Stoute) has always thought he had great talent,” said Grimthorpe.

“Obviously he’s had some interruptions in his career to say the least, so I think when these opportunities come around and the horse is in good form, you have to try to grasp them.

“He’s a lovely actioned horse, so hopefully the faster ground will be in his favour.”

Noon Star missed an intended Oaks run due to a late setback, but the Musidora Stakes second will have her chance to shine in Thursday’s Ribblesdale Stakes.

Grimthorpe said: “She’s heading to the Ribblesdale. She had a little setback before Epsom, but she’s been fine since.

“She’s worked nicely and goes there in good shape.”

Logician was a Classic winner in the Juddmonte colours when landing the 2019 St Leger, but was limited to just two runs last term after suffering a life-threatening case of peritonitis during the winter.

He finished third in a Newbury Group 3 on his return this year and Grimthorpe is keen to see how he fares in Saturday’s Hardwicke Stakes for trainers John and Thady Gosden.

“He’s been in great shape actually, since Newbury. He’s come on again and has been pretty enthusiastic,” he said.

“I should think this will be a pretty good definition of where his career will head after Ascot.

“I have to say, I think John has been very pleased with him. It was great for the family to take this decision to keep him in training.”

Grimthorpe would obviously relish a Juddmonte winner in his final week, but added: “I’ve had so many highs, so whatever happens this week, it will just be part of a fantastic story.”

Barry Mahon will take over the role as Juddmonte’s European racing manager, while Grimthorpe has new projects in his sights.

He said: “I’m going to take a little bit of a breather, but I’m not retiring – I want to stay in the business.

“I don’t know what will come of that, but whatever happens I’ll stay active in the business.”