Stradivarius to face ten in bid for fifth Goodwood Cup 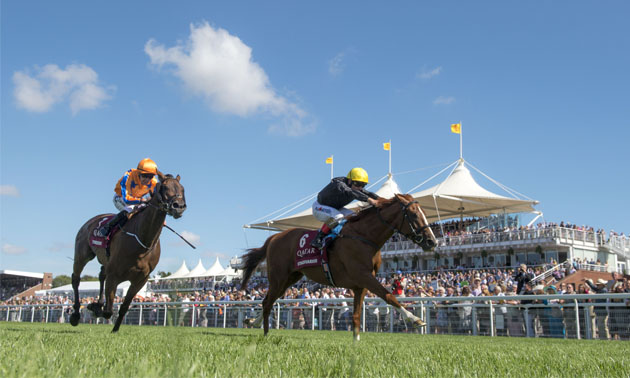 Stradivarius is set to face 10 rivals in his bid for a remarkable fifth victory in Tuesday’s Al Shaqab Goodwood Cup.

John and Thady Gosden’s superstar stayer has landed the two-mile Group 1 ever year since 2017, beating the great Double Trigger’s record of three victories in the race in the 1990s.

Despite having come up short in his bid for a fourth Gold Cup success at Royal Ascot last month, Stradivarius will be a hot favourite to get back on the winning trail on the Sussex Downs under Frankie Dettori.

With his Gold Cup hero Subjectivist sidelined by injury, Mark Johnston instead saddles his half-brother Sir Ron Priestley and his stablemate Nayef Road.

Sir Ron Priestley steps up to two miles for the first time off the back of winning the Group 2 Princess of Wales’s Stakes at Newmarket over a mile and a half, while Nayef Road was runner-up to Stradivarius in last year’s Goodwood Cup, but has been disappointing of late.

Andrew Balding will have high hopes for Spanish Mission, who was one place ahead of Stradivarius when third in the Gold Cup.

The Donnacha O’Brien-trained Emperor Of The Sun is a fourth Irish challenger.

Charlie Appleby’s five-year-old went on to Group One glory in the Prix Maurice de Gheest afterwards and he won the very valuable Turf Sprint in Riyadh in February. However, he was beaten in the Al Quoz Sprint in Meydan on his only subsequent start.

Appleby also has Creative Force, who returns to seven furlongs after his four-race winning run ended with a fifth place in the July Cup.

The second, third and fourth from this contest 12 months ago – Paul and Oliver Cole’s Duke Of Hazzard, David O’Meara’s Escobar and John Quinn’s Safe Voyage – are set to do battle again while Jessica Harrington’s Real Appeal is the sole Irish-trained challenger.

Others in the mix include Roger Varian’s Khuzaam, the Ralph Beckett-trained Kinross, and Pogo from Charlie Hills’ stable.

Berkshire Shadow will try to uphold his 100 per cent record in the Unibet Vintage Stakes.

The Andrew Balding-trained juvenile has not run since scoring at Group Two level in the Coventry Stakes at Royal Ascot following a debut success at Newbury.

Among the seven declared runners are the Richard Hannon-trained Lusail, winner of the July Stakes, and Coventry Stakes runner-up Eldrickjones for trainer Roger Fell. Aidan O’Brien’s The Acropolis represents Irish interests with the field completed by Angel Bleu, Austrian Theory and Secret Strength.