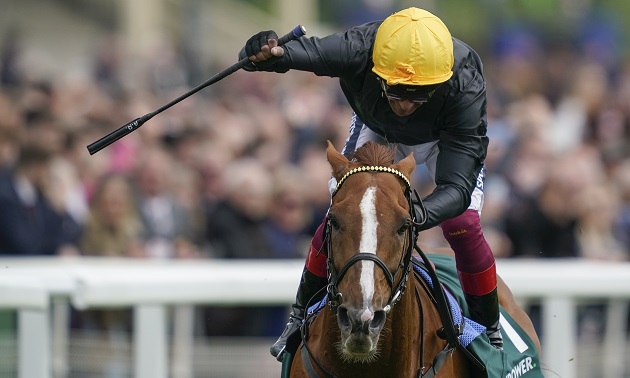 Stradivarius gained a 20th career success and made it a perfect six wins from six races at York with victory in the Paddy Power Yorkshire Cup under Frankie Dettori.

It was a record-breaking performance from Bjorn Nielsen’s eight-year-old, who moved sweetly to the front before finding enough in the end to land his 18th European Group-race victory.

The John and Thady Gosden-trained entire sat fourth early on behind the pace-setting Thunderous and Franny Norton.

When the pace quickened, Stradivarius briefly hit a flat spot but was soon back on the bridle and Dettori eased him through a gap between the leader and Max Vega with three furlongs to run.

He hit top stride with a quarter of a mile left to travel, but the 6-4 favourite idled once hitting the front as he drifted to the stands rail and had to dig deep as Thunderous fought back.

Yet he had a length to spare at the line from the gallant 17-2 runner-up and will now head to Royal Ascot in a bid to land a fourth Gold Cup, for which he was cut to 3-1 by Betfair and Coral.

The son of Sea The Stars returned to a huge reception from the Knavesmire crowd, after what was a third Yorkshire Cup win.

Gosden senior said: “He hit a little but of a flat spot and the next thing you know, he got Frankie there too soon. It was tremendous, he’s a great one for the crowds, isn’t he? Someone asked me what it was like and I said ‘it’s like Desert Orchid’.

“It’s great to be six from six on the Knavesmire and be the leading Group-winning horse of all time in Europe, that takes some doing

“As long as the ground doesn’t go soft or heavy then we hope to go on to Ascot which has always been the plan – one run, then Ascot. We always said here, Ascot Gold Cup and Goodwood. That, hopefully, is our season, we’ll see.

“He’s a real character and it’s lovely to win that and give weight, he gave 6lb to the good filly (Search For A Song) and 3lb to everything else. Let’s hope we can get to Ascot and the ground’s not too deep, I think if he had this ground he’d take a lot of beating.”

He added: “He’s an eight-year-old entire, if he was an eight-year-old gelding it would be a different ball game. He’s done well mentally to get himself there, he knows the gallops and he knows everything backwards. I’m quite careful with the way I train him, if you tried to rub his nose in it he’d tell you what to do with the game.

“He was a bundle of fun to saddle, on his hind legs, every time he saw a filly he started showing off but he came over here and he was a professional as ever.”