Star mares Epatante and Honeysuckle feature among 36 entries for the Unibet Champion Hurdle at the Cheltenham Festival.

The Nicky Henderson-trained mare moved to the head of the market for the March 10 contest after running out a five-length winner in last month's Christmas Hurdle at Kempton.

Epatante had previously won a Listed event at Newbury on her first start since disappointing when favourite for the Mares' Novices' Hurdle at last season's Festival.

Henderson holds a strong hand in the two-mile showpiece, despite the absence of injured dual winner Buveur D'Air.

Klassical Dream, winner of last year's Supreme but disappointing so far this year, also features in a four-strong Closutton entry along with Aramon.

Henry de Bromhead's Honeysuckle is unbeaten in six starts to date and she could be joined by stablemate Petit Mouchoir, while Gordon Elliott has included the rejuvenated Apple's Jade in his seven contenders.

Elliott has also entered top novices Envoi Allen and Abacadabras, while the highly-touted Samcro - winner of the Ballymore in 2018 - is another possible although he has been novice chasing so far this term. 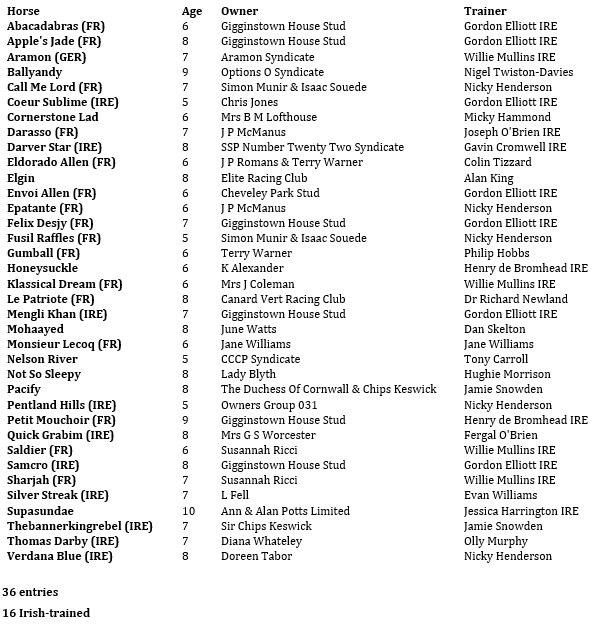