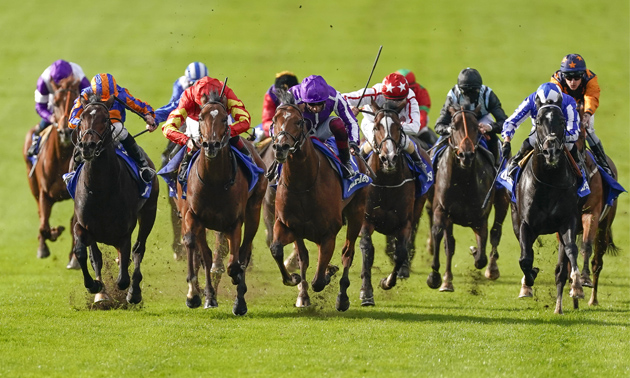 Making his first appearance since winning the Dewhurst Stakes at Newmarket in October under Frankie Dettori, St Mark’s Basilica was a 9-4 chance in the hands of Ioritz Mendizabal, who initially settled his mount in midfield.

Some early scrimmaging meant he got shuffled back in the back, but he began to make inroads on the pacesetters rounding the home turn and was switched wide to deliver his challenge.

Once asked to extend fully, St Mark’s Basilica showed a sizzling turn of foot to charge to the front and he was well on top at the line.

Jim Bolger’s 2-1 favourite Poetic Flare – bidding to double his classic tally following success in the 2000 Guineas at Newmarket a fortnight ago – was stuck behind a wall of horses early in the home straight. He was staying on at the finish and passed the post in sixth.

It's a fifth victory in the French 2000 Guineas for Aidan O'Brien, as ST MARK'S BASILICA lands the prize.

👏 The 2020 Dewhurst winner quickened up very smartly to settle the race there...pic.twitter.com/cjBnGPlgJa

St Mark’s Basilica was due to contest last year’s Prix Jean-Luc Lagardere, but he had to sidestep the engagement due to an issue with suspected contaminated feed, with the colt then rerouted to the Dewhurst.

A second French visit could now be in prospect for next month’s Prix du Jockey-Club over 10 furlongs, although the St James’s Palace Stakes at Ascot provides an alternative over a mile.

O’Brien said: “The plan last year was that he would go to the Lagardere and then on to there.

“He’s been working lovely and you saw the way he progressed through last year.

“They all couldn’t go to Newmarket and when he was to go to France last year, we said we’d stick that way.”

Mendizabal was teaming up with St Mark’s Basilica for the first time and O’Brien added: “He gave him a good ride and rode for us before when second on Lope Y Fernandez at Deauville last year.”

Later on the card, Coeursamba denied Mother Earth a classic double with a shock victory in the Emirates Poule d’Essai des Pouliches.

Having swooped to victory in the 1000 Guineas at Newmarket a fortnight ago, the Aidan O’Brien-trained Mother Earth was the 6-4 favourite to follow up in the French equivalent, with Christophe Soumillon coming in for the ride.

The Zoffany filly travelled strongly for much of the one-mile contest and briefly looked set to prevail after picking up well inside the final two furlongs.

However, she did not pick up as well as Jean-Claude Rouget’s Coeursamba, who was a 66-1 shot under Cristian Demuro but won with something to spare.

The three-year-old had won just one of her seven previous starts, most recently finishing third in the Prix du Louvre over the course and distance last month.

🇫🇷😲 66/1 shock in the French 1000 Guineas, as COEURSAMBA bursts through for Jean-Claude Rouget!

🥈 Aidan O'Brien's Mother Earth, who was bidding to add to her 1000 Guineas success at Newmarket, had to settle for the runner-up spot...pic.twitter.com/rifzHio9Cf

Rouget told Sky Sports Racing: “It’s always a great pleasure to win a Group One. It’s not easy, the race was very open and my filly showed very good things last year at the top level, but didn’t win a Group race.

“She had a good rest in the stud all winter and we gave her a very smooth first race (of the year).

“Today she was on top, she had a good draw and she did the double acceleration I like for Group One horses.

“She’s progressed a lot since the Prix du Louvre. When I saddled her today, I felt she had grown.”

Coeursamba appears unlikely to bid for further Classic glory in the French Oaks, with Rouget keen to stick to a shorter distance – potentially in the Coronation Stakes at Royal Ascot.

He added: “I feel she is better at a mile.

“It (Coronation Stakes) is possible. She’s not entered – I didn’t enter any horse because of plenty of things.

“There is the Prix Rothschild or she can run in the Prix Jean Prat against the colts, or we could supplement (for the Coronation Stakes).”