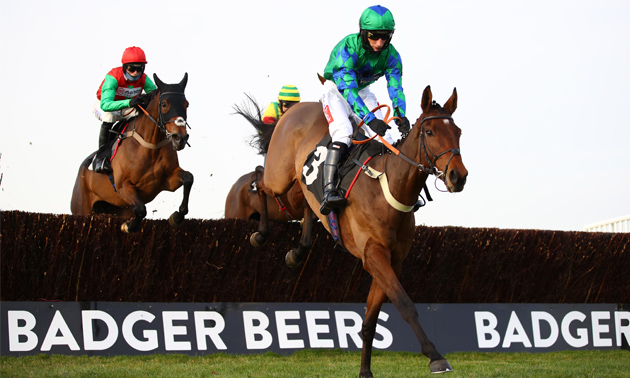 Jamie Snowden is confident Ga Law can handle a drop in trip when putting his unbeaten record over fences on the line in the Planteur At Chapel Stud Henry VIII Novices’ Chase at Sandown.

The four-year-old, who is three from three since being sent chasing, will race over two miles for the first time on his Grade One debut on Saturday.

Ga Law took his form to new heights after following up victories at Fontwell and Exeter with an emphatic success in the Grade Two Rising Star Novices’ Chase at Wincanton last time out.

A smart performance from Ga Law who remains unbeaten over the larger obstacles for @jamiesnowden & @Dazjacob10 with success in the Rising Stars at @wincantonraces pic.twitter.com/2UwB7AQIgc

Snowden said: “He has looked pretty impressive in his three starts to date over fences.

“The beginners’ chase at Fontwell over an extended two miles and three furlongs looked the right place to start him off, and then we thought we would take advantage of his handicap mark over two three at Exeter.

“The Rising Stars at Wincanton fitted nicely into his programme to then go to the Henry VIII.

“Dropping back in trip is the one question mark. But his half-brother wanted two miles, and there is no reason why this chap can’t.”

Paul Nicholls has entered Hitman and Tamaroc Du Mathan, who were both impressive last time out at Ffos Las and Wincanton respectively.

“If it didn’t rain much all week, he (Tamaroc Du Mathan) would run and Hitman would go to Exeter on Friday, but if it did rain a lot then Hitman, who was very impressive at Ffos Las, would run at Sandown,” said Nicholls.

“Tamroc Du Mathan was awesome at Wincanton, but that was in a handicap and this is a Grade One, which is big difference as it is a big step up in class. You would expect most of those in the line up to have done what he did at Wincanton.

“We did think about running Tamaroc Du Mathan at Newbury last week, but in my experience, backing horses up that quickly doesn’t often work out.”

Dan Skelton has entered Allmankind, who was electric on his chasing debut at Warwick, and like Hitman and Ga Law is only four, so will get a weight allowance.

Nicky Henderson’s Fusil Raffles needs to bounce back from a disappointing display in a Cheltenham Grade Two, while Eldorado Allen, who won that race, could also turn up.

Harry Fry’s Phoenix Way, another to win on his chasing debut, and the Nigel Twiston-Davies-trained mare Zambella complete the list.