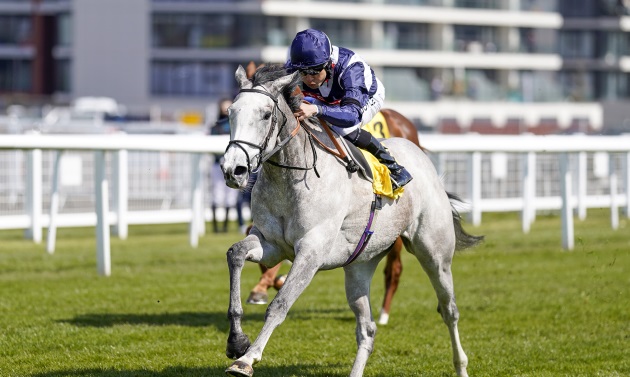 Snow Lantern ran out a cosy winner of what is sure to be an informative Dubai Duty Free Tennis Championships Maiden Stakes at Newbury.

Richard Hannon’s grey filly is certainly bred for the job, being out of two Guineas winners in Frankel and Sky Lantern, the latter also trained by Hannon.

It looked a strong event on paper with Enable’s half-brother Derab and the Roger Varian-trained Fantastic Fox having also shown decent form, while there was market support for Simon and Ed Crisford’s newcomer Saleymm.

It was three of those with previous experience who fought out the finish, though, with Sean Levey on Snow Lantern (3-1) taking the race by the scruff of the neck over a furlong out.

While John and Thady Gosden’s 11-8 favourite Derab did hit top gear late on, looking sure to be suited by going over further than a mile, Snow Lantern was not hard pressed to beat him by a length and three-quarters with Fantastic Fox a short-head further back in third.

Hannon: “I haven’t enjoyed watching a race like that as much for a long time and I feel relief in a way because she is highly strung and I was worried about that, but she’s come here and behaved perfectly well.

“Obviously as a daughter of Frankel and Sky Lantern she’s got the lot and I’m very tempted by the Guineas, but we need to discuss it during the week.

“She did have some problems last year and of course Newmarket is an undulating track, but then her mother won two Group Ones there and if the owners want to go there must be a good chance that she will.

“Against that I will enter her for the Michael Seeley, a Listed race at York, as we are obviously keen to get some black type.

“Sean said her stride pattern was far from the normal kind and that augurs well for her.”