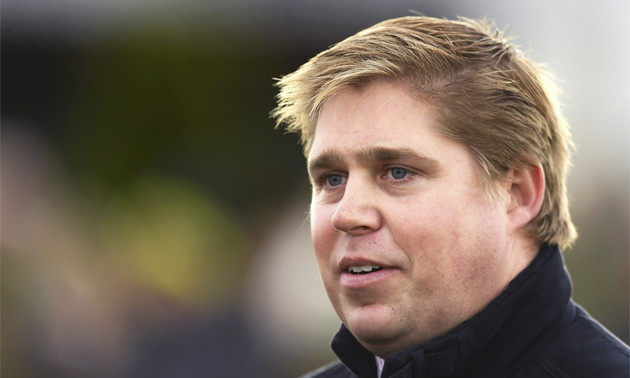 Success at this year's Cheltenham Festival may have eluded trainer Dan Skelton, but he believes there are plenty of positives to be taken going forward into next season.

Although the Alcester handler failed to strike gold at National Hunt racing's most coveted meeting having enjoyed two winners there 12 months earlier, Skelton was suitably encouraged with regards to the future.

While the trainer is the first to admit there is room for improvement, the results were roughly what he expected from his team.

He said: "Apart from Allmankind running a bit flat in the Triumph Hurdle, nothing really underperformed or found 10lb of improvement.

"If I was grading it, I would be giving it a C as we did all right, but could do better.

"At the end of the day, they all ran all right and the ones that I thought should be placed were and the others finished where we half-expected them to."

Giving Skelton one of the biggest reasons to smile was the performance of Champion Bumper fourth Third Time Lucki, a horse he expects to fly high among the novice hurdle ranks next term.

He said: "It was a very good run by Third Time Lucki in the Champion Bumper and hopefully that sets him up beautifully for novice hurdles next season.

"Hopefully he will take high rank among the British novice hurdlers and I would be surprised if he didn't based on that run.

"I would definitely start him off over two miles, I could see him stepping up to two and a half, but nothing is confirmed yet. I expect big things from him."

Roksana was fourth in the defence of her Mares' Hurdle title behind Honeysuckle, but Skelton is confident she can pick up the winning thread again when returned to three miles.

He said: "I think she ran respectably, but we will look at races over three miles next season.

"Last year she was two or three lengths behind Benie Des Dieux when she fell and she was in exactly the same place this year. She finished ahead of Stormy Ireland and did again this time and this was a much stronger renewal.

"She has been carrying a Grade One penalty, which she won't have to next season, and not carrying that penalty will see her win races."

Skelton will be looking to dodge Goshen, who fell at the last when running away with the Triumph Hurdle, with Allmankind next year.

He said: "I thought he ran flat and Harry (Skelton) got off him and said he ran flat, but he has still won a Grade One this season and a Triumph Hurdle trial.

"We wouldn't have beaten Goshen, who was extremely impressive and the moral winner, even if we were at the top of our game as there hasn't been a four-year-old as exciting as him in a long time.

"It's the hardest year for hurdlers after their juvenile season, so we will see what the season brings and I'm not going to make big commitments or bold predictions. I think we will just try to avoid Goshen."

Of the rest of his Festival team, Skelton believes Langer Dan emerged with plenty of credit for his run in defeat in the Boodles Juvenile Handicap Hurdle, better known as the Fred Winter, and is a useful prospect for next season.

He said: "Oldgrangewood ran his usual race, while Mohaayed, who ran in the County Hurdle, looks like he wants two and a half and although better ground would have helped Beakstown in the Northern Trust Novices' Handicap Chase, that still probably wouldn't have been enough to win.

"Langer Dan finished sixth, beaten just under five lengths, and I was very happy with him.

"I'd be tempted to start him off in the four-year-old handicap back at Chepstow or the Silver Trophy there, but I can see him stepping up in trip next season as well."