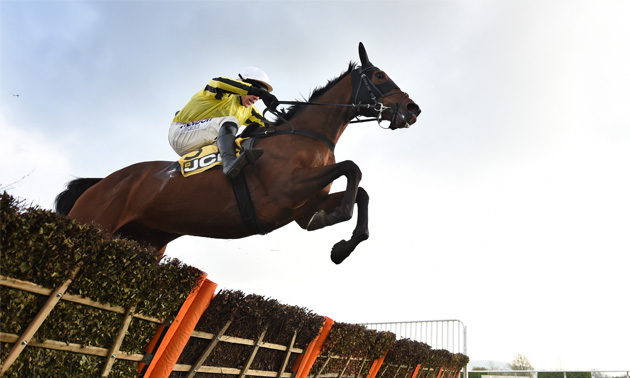 Dan Skelton is pleased with Allmankind as his flamboyant prospect prepares to make his seasonal debut in the Masterson Holdings Hurdle at Cheltenham on Saturday.

The Alcester trainer earmarked this contest as a launching pad some time ago for his four-year-old, who was one of the leading juvenile hurdlers last term.

Allmankind (Timeform rating 147p) won his first three starts, culminating in the Grade One Finale Hurdle at Chepstow and wound up with third place in a dramatic running of the Triumph Hurdle at the Festival in March.

An impressive all the way success for ALLMANKIND in the (Grade 1) Coral Finale Juvenile Hurdle at @Chepstow_Racing for @DSkeltonRacing!

“Allmankind is in good form and Saturday’s contest has been the plan since the start of the season,” said Skelton.

“It’s an ideal race to run in given it is against four-year-olds, so he can take on his age group one last time before he takes on the older horses.

“He has to carry a penalty, but he is a Grade One winner. I am really happy with him at home and he is ready to start.

“He just ran quite flat at Cheltenham in the Triumph Hurdle. I am not saying he would have beaten Goshen in any case, but he just ran very flat in that race.

“There is no point dwelling on the past and we are looking forward to getting him started. It is a new season, with a new start and new objectives.”

Neil King’s Nordano (138) finished behind Allmankind twice last season, but won a valuable handicap hurdle at Ascot in February and had a pipe-opener on the Flat at Pontefract three weeks ago.

Botox Has (139p), trained by Gary Moore, was second to Allmankind on this course in November but has been absent since winning back at Cheltenham in December.