Shishkin the highest-rated horse in training 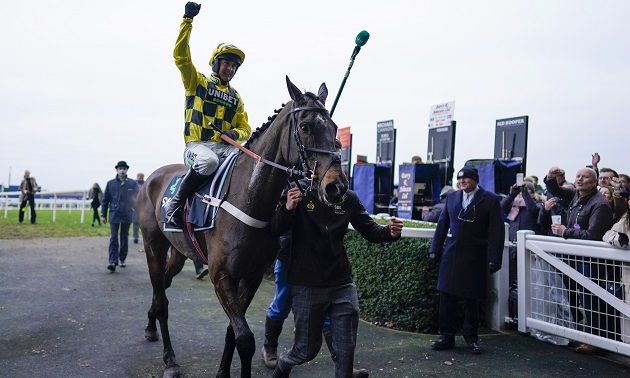 Shishkin has earned a provisional Timeform rating of 181p following his thrilling victory over Energumene in the Clarence House Chase, making him the highest-rated horse in training.

Chacun Pour Soi had set the standard with a Timeform rating of 179, but that benchmark has been passed by both Shishkin (181p) and Energumene (180) after the duo served up a race for the ages in the Clarence House Chase.

A Timeform rating of 181p places Shishkin behind only Sprinter Sacre (192p) among Nicky Henderson's great two-mile chasers - Altior had a peak rating of 180.

Timeform’s chase handicapper Phil Turner said: "It was a terrific race, both in terms of excitement and level of form. Last year’s winner First Flow arrived here on the back of a career-best effort, so the fact that the big two could pull so far clear of him in the latter stages says plenty for what they achieved - a view which is fully backed up by the stopwatch.

“It usually takes a top-notch rival to push a horse beyond the 180 ratings barrier and that was certainly the case with Nicky Henderson’s two recent two-mile chasing superstars. Sprinter Sacre, for example, was chased home by Cue Card (twice) and Sizing Europe on the three times he bettered that lofty figure, whilst the stopwatch king Min was runner-up on the sole occasion when Altior ran to that level. It reflects well on Energumene, therefore, that he could push Shishkin much closer than any of those illustrious names did to either Sprinter Sacre or Altior and he enhanced his own reputation today despite meeting defeat.

“That said, Shishkin arguably deserves extra credit given he was always on the back foot after an unlucky peck around halfway so there could be even better to come from him. Indeed, Cheltenham’s Old Course is likely to play to his strengths more than Energumene – particularly the extended stretch between three out and two out – and we’d expect him to confirm the placings in the Queen Mother Champion Chase. Let’s just hope they both turn up there in the same sort of form!”