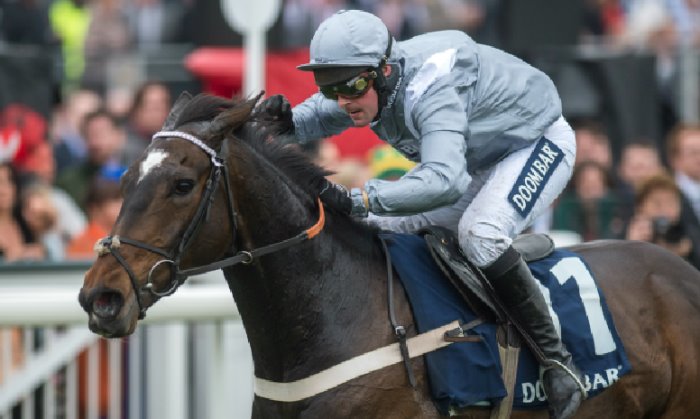 Santini lived up to his billing with an impressive debut over fences in the Ladbrokes John Francome Novices' Chase at Newbury on Saturday.

Having finished last season with victory in the (Grade One) Doom Bar Sefton Novices' Hurdle at Aintree, the Nicky Henderson-trained Santini made a successful transition to chasing in the extended two-mile-seven-furlong Grade 2 contest at Newbury on Saturday.

Despite making one mistake within the race, the 11-8 favourite reinforced his class and ability late on to get the better of the prominently-ridden Rocky's Treasure after the last, before going on to score by a distance of four lengths under jockey Nico de Boinville.

He was cut to 3-1 for the RSA Chase at the Cheltenham Festival in March by both Unibet, Paddy Power and Betfair, while Coral went 9-2 for the same race.

Henderson said: "You would have to be very pleased about it. I was nervous about the ground. He is a beautiful horse, but he is big and he is gross. He is quite laid-back about it at home.

"We got on the grass on Thursday to school and that was the first day he has woken up, but he is like that. I couldn't believe he was straight enough, to be honest. He is so lazy about it all. I thought it was a great performance.

"Nico gave him a lovely ride, as he let him find his feet, and although he made a couple of little mistakes, he let him think about it.

"He jumped a couple a little bit big, but he was just learning and he will learn a lot for today and he will come on any amount."

Looking forward to potential plans in the future, Henderson added that a visit to Kempton Park on Boxing Day could be his next outing.

He said: "I suppose he will have to go to Kempton (Kauto Star Novices' Chase), as there are so few you can run him in."