Santa Barbara heads final field of 14 for the Oaks 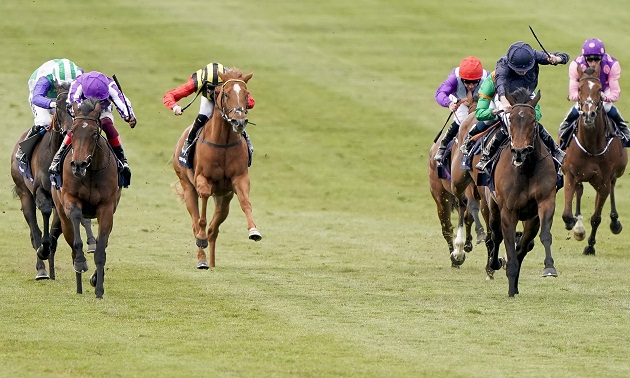 Ante-post favourite Santa Barbara is one of 14 fillies declared for the Cazoo Oaks at Epsom on Friday.

Santa Barbara made a big impression when winning on her racecourse debut at the Curragh in September and was a major gamble for last month’s 1000 Guineas at Newmarket amid reports of scintillating workouts on the Ballydoyle gallops.

Aidan O’Brien’s charge – who is the choice of Ryan Moore – had to make do with minor honours in fourth over the Rowley Mile, but is once again strongly fancied to claim Classic glory at the second attempt.

Archie Watson’s Sherbet Lemon, Roger Varian’s Save A Forest and Hugo Palmer’s Ocean Road finished first, second and third at Lingfield and are all in contention once again.

Mark Johnston saddles Cheshire Oaks winner Dubai Fountain, while Saffron Beach is stepped up in trip by Jane Chapple-Hyam after finishing second in the 1000 Guineas.

The Martyn Meade-trained Technique and the supplemented Mystery Angel, trained by George Boughey, complete the field.

Members of the Nick Bradley Racing syndicate that own Mystery Angel, who finished fourth in the Musidora, stumped up £22,500 to add her to the field earlier in the week and are hoping for a bold showing following a pleasing gallop at Epsom last week.

Bradley said: “It looks a stronger race than we’d have liked, but we are where we are.

“The track will suit and she appears to be in very good form – she’s in better form at home than she was going to York.

“She looks overpriced a little bit at the moment, I think. We’re hopeful of a good run.”

William Haggas’ four-year-old is a hot favourite to strike Group One gold at the first time of asking following two comfortable Group Three successes this term, in the John Porter and Aston Park Stakes, both at Newbury.

Al Aasy will not have it all his own way though, with Aidan O’Brien fielding two top-class performers in full-brothers Mogul and Japan.

Japan returned to form with victory in the Ormonde Stakes at Chester last month, while Mogul has finished seventh in the Dubai Sheema Classic and third in the Prix Ganay in his two 2021 starts so far.

Both are no strangers to Epsom, with Japan having finished third in the 2019 Derby, while Mogul was seventh in the Classic last year.

Another horse familiar with the Downs is Pyledriver, who represents William Muir and Chris Grassick.

The four-year-old endured a luckless run in last year’s Derby, but did strike Group Two gold at Royal Ascot and York, before finishing a fine third in the St Leger at Doncaster.

He warmed up for this outing by chasing home Sir Ron Priestley at Newmarket last month.

The Kirsten Rausing-owned pair of Alpinista and Albaflora, trained by Sir Mark Prescott and Ralph Beckett respectively, plus Highland Chief from Paul and Oliver Cole’s yard complete the line-up.