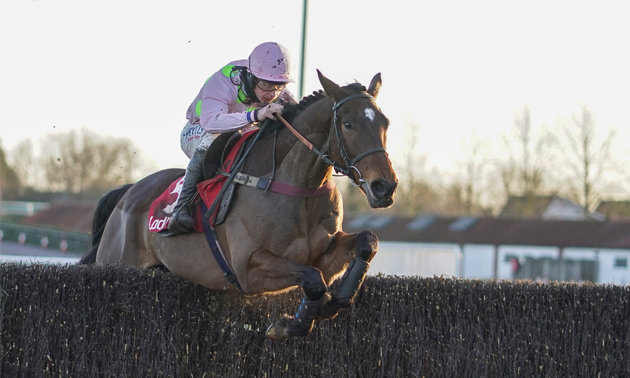 Royale Pagaille looks a horse destined for the very top judged on a brilliant display under top-weight in the Peter Marsh Chase at Haydock.

The French import was beaten on his first two starts for trainer Venetia Williams and leading owner Rich Ricci last season, but appears much improved this winter, with this his third successive victory.

A novice chase success on Merseyside was followed by an emphatic victory on his handicap debut at Kempton over the Christmas period – and even a 16lb hike in the weights to a lofty mark of 156 was nowhere near enough to stop him completing his hat-trick in devastating style.

Initially ridden with restraint by Tom Scudamore, Royale Pagaille jumped and travelled with such fluency that he tanked his way to the from racing down the back straight for the second time.

While most of his rivals had cried enough in the ultra-testing conditions rounding the home turn, Scudamore’s mount was remarkably still full of running – and safely negotiated the remaining obstacles in the straight to score by 16 lengths.

Grade 1 horse in a handicap?

ROYALE PAGAILLE bolts up under top-weight in the Peter Marsh Chase at @haydockracespic.twitter.com/X1vpFI3kl8

Scudamore said: “To do that in this ground – win off a mark of 156 by 16 lengths – is very impressive. You don’t get too many horses that are able to do that.

“He’s jumped from fence to fence and travelled so well. He’d got them cooked at the top of the straight.

“It was a huge thrill and a pleasure to be able to ride him today.”

The seven-year-old has several options at the Cheltenham Festival, having been entered for three of the four novice chases, as well as the Cheltenham Gold Cup, for which Coral go as short as 12-1.

Scudamore said: “I’ll leave plans entirely up to Venetia and Rich Ricci. I was just lucky to be able to ride him today.

“He’s a second-season novice. I’ve ridden some very nice novice chases and he’s up there with the best of them.

“Whatever they go for, whether it’s the RSA (now Festival Novices’ Chase), or the Gold Cup or the National Hunt Chase, the world is most certainly his oyster.”

Williams was at Ascot, where she was guarded on a Gold Cup bid, but nevertheless delighted with her charge’s progress.

She said: “I bought him at the Arqana Sale at Deauville in November 2019, and it took me until 12 months later to sell him, and that’s when Rich and Susannah (Ricci) stepped in.

“Looking at the times (at Haydock), I don’t imagine it was too heavy up there – but the handicapper will hike him up again, and it will force me to put him in rare areas near the top.

“This is his third season as a novice chaser, and in the first two he didn’t win, but he’s very progressive now.

“But I was delighted. He’s a perfect example of a horse that’s needed time.

“I can’t say he will definitely go for the Gold Cup, and there will be much discussion before any decisions are reached.”