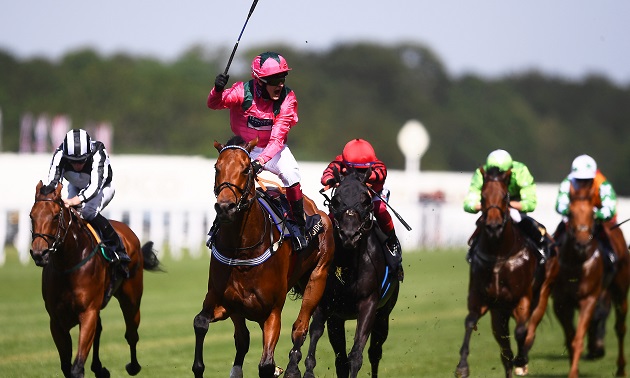 Oxted returned to his brilliant best to run out victorious in the King’s Stand Stakes at Royal Ascot.

Roger Teal’s sprinter was reunited with an inspired Cieren Fallon – who had partnered him to success in the July Cup last season – and the young rider was able to stand up in his saddle to salute the watching crowd a few strides from the line.

The five-year-old Oxted was surprisingly running over the minimum distance for the first time in his career, although he had won the Portland Handicap over five and a half furlongs at Doncaster in 2019.

The pace in the early stages was red hot, with even Wesley Ward’s Maven struggling to keep tabs on the flying females Que Amoro and Winter Power.

As Que Amoro began to weaken, Winter Power was left in front – but Jim Crowley appeared to have her covered on Battaash with a furlong to run.

However, last year’s winner, who had a setback in the off-season meaning he was making his seasonal debut, failed to pick up when Crowley asked for an effort and he was eventually swamped, although he clung on gallantly for fourth.

Oxted (4-1) had been under pressure for a while, but powered through close home to win going away by a length and three-quarters from Arecibo and American raider Extravagant Kid.

It was a first Royal Ascot winner for both trainer and jockey, the son of six-times champion Kieren Fallon who himself enjoyed so many memorable days at the showpiece meeting.

Teal said: “It’s unbelievable, like a dream come true. This horse has been such a wonderful servant and yet he’s only a young horse and hopefully there are more days to come.

“With the Saudi trip we went because the prize-money was fantastic, but I probably ran him in the wrong race – it was just the turf sprint was almost seven furlongs. He wasn’t used to dirt and it’s a different style of racing.

“I probably backed off him too much before the Abernant and at York the ground had just gone a little. I was getting asked all the time if I was disappointed, but I thought he ran a blinder.

“The reason we came here was because if we were ever trying him over five it had to be at Ascot as it’s a stiff five. After two furlongs, I won’t lie – I was a bit dubious, but once he got to halfway his stamina came through and he was very impressive.

“Cieren gets on well with him, he won the July Cup on him. Unfortunately he was injured before the Abernant and then he had to ride The Lir Jet in France who ended up not running so he missed the ride at York.

“I think we’ll look at the July Cup again next and then see.”

Palace Pier justified odds-on favouritism in the Queen Anne Stakes to get Royal Ascot 2021 off to a perfect start for Frankie Dettori.

Winner of the St James’s Palace Stakes at the meeting 12 months ago in front of empty grandstands, John and Thady Gosden’s brilliant miler followed up in front of a crowd of 12,000 this time.

Entering the final two furlongs, those who took the prohibitive 2/7 price about Palace Pier might have been a little concerned as Dettori got lower in the saddle to ask for his effort. But while the winning move was not immediate, Palace Pier got into top gear with a furlong to run – and the race was over as he took two lengths out of the others.

He just had to be kept up to his work as Lope Y Fernandez emerged from the pack to claim second, a length and a half away, with Ascot specialist Sir Busker back in third.

Gosden senior said: “We suspected a slow pace and we got that slow pace, so the key thing then is don’t sit out the back. He did it smoothly, came through and won his race, but he’s exactly like his father (Kingman) – as soon as he gets there he thinks he’s done enough.

“If I worked him at home with an ordinary horse he’d just stay with him, that’s his game.

“Frankie was aware there was no pace so he asserted early, then I noticed he was just hands and heels to keep him going. He’s probably done more in a piece of work at home than today."

Looking to the future, the Clarehaven handler said: “You could go up in trip with him, as you can see how relaxed he is. He is in the Juddmonte, but he’s also in the Sussex and the Prix Jacques le Marois, so I’ll talk to the owner and see.

“All the races are options, he’d have no trouble with the trip if they decide to go there.”

Berkshire Shadow sprouted wings in the closing stages to land the Coventry Stakes for Andrew Balding and Oisin Murphy.

Victorious over five furlongs on his debut at Newbury, despite fluffing the start, he looked sure to be suited by an extra furlong – and so it proved.

Vintage Clarets hit the front on entering the final furlong but it was the 11-1 chance Berkshire Shadow who quickened up best of all to maintain his unbeaten record by a length and a quarter from Eldrickjones, with Vintage Clarets third.

Murphy said: “This is a special horse, he was bought inexpensively by Andrew and his mother and he’s a star.

“That was an incredible performance on his second start. To look at, he’s big and immature

“He’s got a very good future – and look what he’s just done at Royal Ascot.

“He’s done incredibly well, what a massive result for Kingsclere!”

Poetic Flare produced a brilliant performance to leave his rivals toiling in the St James’s Palace Stakes at Royal Ascot.

Jim Bolger’s charge had won the Qipco 2000 Guineas at Newmarket earlier in the season, run respectably in the French equivalent on soft ground and then been touched off by stablemate Mac Swiney in the Irish version.

As he had already won a Guineas trial before Newmarket he was having his fifth run of the season – and had obviously thrived for it.

Kevin Manning had the son of Dawn Approach in the box seat throughout and in truth the result never looked in any doubt as soon as he moved his partner into a challenging position.

Bolger told Sky Sports Racing from his County Carlow base: “We always knew he was hardy from the word go, even when he was being broken in you couldn’t keep him quiet.

“We’ve bred from the family since the very early 1980s, so a long time.

“When you have a horse winning the St James’s Palace like that you don’t really think about all the relatives and the breeding, you wouldn’t care if he came to you off the back of a truck as long as you had him.

“This horse is so hardy he’s unbelievable, you have to give it to him to keep his back down.”

Manning said: “He was probably better today than he has been all year.

“He travelled very well – I arrived there at the two-pole and couldn’t believe how well I was travelling and when I asked him he put it to bed very quickly.

“I wasn’t worried that he’d been busy, Jim was very happy with him and said he’d never had a horse leave the yard in the shape he was in and I thought that as well. With that sort of confidence behind me, I had no worries.

“I had a lovely position, everything went very smooth and when I switched him out he put the race to bed in a few strides.

“He’s very good, very smart. He handles every ground, but he’s obviously much pacier on this ground."