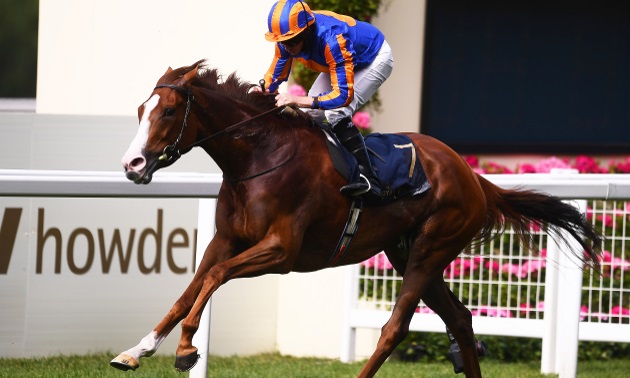 Love had to battle hard for a triumphant return in what proved to be an epic renewal of the Prince of Wales’s Stakes at Royal Ascot.

Love was back on a racecourse for the first time in 300 days, since completing a clean sweep of three 2020 victories when she added the Yorkshire Oaks to her 1000 Guineas and Oaks successes.

In the absence of Lord North, who would have been her market rival but was pulled out of his attempt to defend his crown here because of fast ground, 11-10 favourite Love made all – but had a fight on her hands all the way up the straight as James Fanshawe’s Breeders’ Cup winner Audarya launched a persistent challenge.

But Love would not be denied and was on top at the line by three-quarters of a length from Audarya, who was also having her first run since last year, with O’Brien’s second-string Armory third.

Ryan Moore had the winner settled in front, with Audarya and My Oberon pulling hard behind, and Love’s relaxed demeanour – on the fast ground which suits her so well – helped her keep enough in hand when she needed it in the final two furlongs.

O’Brien was full of praise for Love’s tenacity, as a daughter of Galileo – and Moore’s successful tactics.

“We were a little bit worried coming here today, because she was prepared for a few runs and didn’t get to run.

“To come into a race like this without a run was a big disadvantage.

“She has all the attributes of a Galileo. When you really want them – I knew watching Ryan’s body language, the mare was galloping with her head on the ground, and she was only waiting for Ryan to say ‘come on’.

“I knew when he did that, she would find for him – and that’s exactly (what happened). She gives all, this filly.

“That’s an unbelievable trait, and probably the most important trait in any thoroughbred – and she has it in spades, multiplied by 10.”

Love lived up to all her trainer’s expectations.

He added: “She gives everything. There’s nothing left, nothing spare – whatever you want she’s there to answer all the time.

“She was vulnerable today, at the distance – and making her own running, as the race came together there was no pace in it.

“Ryan did a great job, doing enough for her to win and at the same time not doing (too much) because he knew Armory was going to be coming from the back, and was prepared for the race.

“It was brilliant really. He gave her a great ride, and it’s a pleasure and a privilege to have her.”

A return to Ascot for next month’s King George VI And Queen Elizabeth Stakes appears to loom large for Love – although the shorter Eclipse at Sandown is also a possibility.

“The lads (owners Coolmore) will decide what they want to do,” said O’Brien.

“Obviously she has all the options, the King George, an Eclipse, all those kind of races.

“You’d think hard about the King George, see how she is. If the ground was nice, high summer – after being round the track here – they are the type of races to suit her.

“She definitely has to be in the reckoning for a King George – but we’ll see shortly."

Carroll delivered Quick Suzy from off the pace on the stands side to challenge favourite and eventual runner-up Twilight Gleaming a furlong out, stretching clear to win by a length and a quarter at 8-1 – with 50-1 outsider Cheerupsleepyjean almost another two lengths back in third.

County Meath trainer Cromwell is more often associated with success over jumps – including at Grade One level at the Cheltenham Festival – but is adept on the Flat, too.

Quick Suzy, a maiden winner at the Curragh last month and then a Group Three runner-up at Naas, has nonetheless broken new ground for the yard with her Group Two victory.

Cromwell said: “She won her maiden very well, it was an auction maiden that doesn’t carry as much weight, she was very convincing there – then she went to a Group Three the last day in Naas and just didn’t quite see out the six furlongs on soft ground. But she showed blistering pace, so we were definitely coming here.

“(The fast ground) was an unknown, she’s a very good mover but she’d never raced on it.”

Asked to compare Royal meeting success with Cheltenham Festival glory, Cromwell – who won the Champion Hurdle in 2019 with Espoir D’Allen – added: “It’s centre stage and any race when you’re centre stage is fantastic.

“On a stage like this, you’re definitely going to get a buzz.”

The daughter of Profitable was recently bought by Eclipse Thoroughbred Partners LLC, and Cromwell said: “The plan was she was to remain with me for Royal Ascot and then she was going to go to America. You wouldn’t know, but we might get to twist their arm and hold on to her and go to the Breeders’ Cup.”

Carroll said: “Every step of the way I was trying to make sure the American horse didn’t get first run on me. She’s game and she battled all the way.

“I rode her over six furlongs at Naas where she showed so much natural speed. You need these big wins to get yourself on the platform.”

William Buick, striking for the second time at this year’s meeting, always had Kemari close to the pace just behind the leaders before challenging early in the straight and striking for home.

It proved the right move as the Dubawi gelding surged clear and then had enough in hand in the final furlong to comfortably resist the late challenge of Aidan O’Brien-trained favourite Wordsworth.

The 15-2 winner had a length and a half to spare at the line, as Wordsworth stayed on strongly after being unable to find a change of gear when it mattered most, and Stowell was another length and a quarter back in third.

Kemari, who made his debut when second at Newmarket little more than a month ago before winning a Yarmouth maiden, clearly relished the step up in trip as he provided Godolphin trainer Appleby with his first winner of this race.

Appleby said: “I must give the team at home a lot of credit for this. He’s been a challenging horse at home during the course of the winter. He was gelded and had a hood on his first start, so all credit to them – they’ve done a great job.

“And William, he placed him highly after that win at Yarmouth. I have to say, I sat on the fence and thought he was a horse that was progressing, but whether he’d be progressing quick enough to step up into today’s league – he’s proven me wrong and William right.

“The horse is definitely going the right way.”

He went on: “He’ll hopefully make up into a Cup horse for next year. The last few years, three-year-olds in the Melbourne Cup have produced the goods, so whether he gets to that level, we’ll see.

“We’ll enjoy today and have the discussions with our principles and managers during the next few weeks and map the autumn out.

“He’s a horse that’s got a profile working in that direction (Melbourne), but whether he goes there, we’ll enjoy today and have the nice discussions over the next few weeks.”

Asked about the possibility of tackling super stayer Stradivarius in next month’s Goodwood Cup with a hefty three-year-old allowance, Appleby replied: “We’ll wait for a couple of days and see how the Gold Cup goes!

“He’s a horse that’s come to hand over the last eight weeks now, so whether that might be a step too soon for him, it’s a nice discussion to have.”

Indie Angel heaven sent for Dettori in Duke of Cambridge

Dettori, striking for the second time for the Gosdens at this year’s meeting, bided his time on the 22-1 winner as Parent’s Prayer set out to make all and then Lady Bowthorpe made her bid for Group Two glory.

The Italian manoeuvred into position to challenge on the stands side, took over from eventual runner-up Lady Bowthorpe and had two and a half lengths to spare at the line – with favourite Queen Power staying on to take third, just another short head away.

Indie Angel, owned by Cheveley Park Stud, was overturning last month’s Newmarket form – having finished only fourth in the Dahlia Stakes behind both Lady Bowthorpe and Queen Power, over a furlong further than this.

“She likes faster ground, cover, and she likes plenty of room – she got all three of those things.

“Well done to the Gosden team, the Clarehaven team.”

Gosden said: “In fairness she won very well last backend, it went a little wrong and I probably ran her before she had come to herself in the spring and she had a little complication in her last race. But we knew she could be competitive with the top fillies – (but) to say that she’d win by two and a half lengths? No, that would have been wishful thinking.

“She relaxed beautifully and she’s bloomed. She looked a different filly today than when we last ran her back in May.

“You’ve got to be looking forwards. She’s now won a Group Two so maybe you start trying to climb even higher up the ladder. We won it last year (with Nazeef) and there are nice races like the Sun Chariot and the nice fillies’ race (Falmouth) at the July meeting for her, so those are possibilities.