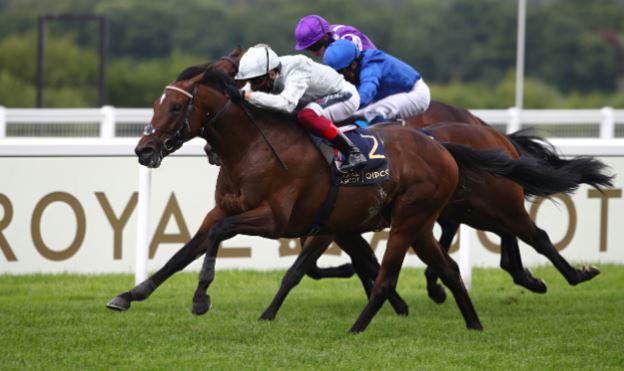 Hot favourite Palace Pier is set to face 10 rivals in the opening Queen Anne Stakes at Royal Ascot on Tuesday.

The Kingman colt won a thrilling renewal of the St James’s Palace Stakes on the same card 12 months ago – and went on to double his Group 1 tally in the Prix Jacques le Marois at Deauville. John and Thady Gosden’s stable star suffered defeat on his final start of 2020 when only third in the QEII at Ascot in October.

However, having bolted up on his return to action at Sandown before slamming his rivals in the Lockinge at Newbury last month, Palace Pier is odds-on to get Royal Ascot punters off to a flyer in the hands of Frankie Dettori.

Aidan O’Brien saddles both Breeders’ Cup Mile winner Order Of Australia and Lope Y Fernandez. The latter needs to bounce back from a disappointing effort in the Lockinge on his latest appearance.

There are two previous winners of the Queen Anne in contention, with Eve Johnson Houghton’s shock 2018 scorer Accidental Agent and David O’Meara’s 2019 hero Lord Glitters both back for another shot.

The only horse not declared from the confirmation stage is Tilsit.

Classic hero Poetic Flare and the unbeaten Mostahdaf are among 13 colts declared for the St James’s Palace Stakes at Royal Ascot.

Jim Bolger’s Poetic Flare landed the 2000 Guineas at Newmarket in early May, since when he has finished sixth in the French Guineas and runner-up in the Irish Guineas behind stablemate Mac Swiney.

Mostahdaf has won each of his three starts to date for John and Thady Gosden – completing his hat-trick in the Heron Stakes at Sandown almost four weeks ago.

The Frankel colt beat Charlie Appleby’s Highland Avenue by half a length in that Listed contest and the pair will renew rivalry at Group 1 level on Tuesday.

Battleground and Wembley, who both sport first-time tongue ties, plus Thunder Moon all disappointed in the Guineas at Newmarket and Wembley has also since failed to fire in the Irish equivalent.

Battaash returns in the King's Stand

The seven-year-old will be making a belated seasonal debut after suffering an injury during the winter, but he has been successful first time out in all five previous campaigns.

The Charlie Hills-trained speedster took the prize in grand style 12 months ago after finishing runner-up in 2018 and 2019.

He will be a warm order to repeat the dose but is expected to face strong opposition from younger sprinters headed by Tim Easterby’s three-year-old Winter Power.

Roger Teal’s Oxted, winner of the July Cup in 2020, drops down to the minimum trip for the first time in a bid to land a second Group 1.

Liberty Beach, third 12 months ago, returns for more on the back of winning the Temple Stakes at Haydock last month.

There are two American raiders in Brendan Walsh’s Al Quoz Sprint victor Extravagant Kid and Wesley Ward’s Maven, while The Queen is represented by King’s Lynn.

Ward has the ante-post favourite, Kaufymaker, in the Coventry Stakes.

The only filly in the 17-runner field, the daughter of Jimmy Creed made a big impression when romping home on her debut at Keeneland two months ago.

Aidan O’Brien relies on The Acropolis to give him a record 10th victory in the Group 2 for two-year-olds over six furlongs. Masseto, trained by his son, Donnacha, is the other Irish-trained raider.

John and Thady Gosden have two live contenders in Dhadab and Tolstoy, as does Richard Hannon in Gisburn and Secret Strength.

The Authorized gelding took the Group 3 Brigadier Gerard Stakes at Sandown last month and has to carry a 5lb penalty.

Willie Mullins is three-handed with M C Muldoon, Rayapour and Royal Illusion as Ireland’s champion jumps trainer bids to win the Ascot Stakes for a fourth time in seven years.

The Alan King-trained Coeur De Lion, winner 12 months ago, is among the 20 final declarations.

King has a leading fancy in top-weight On To Victory in the concluding Copper Horse Handicap.

Mullins goes for this mile-and-three-quarter prize with Saldier after 16 horses were declared, plus three reserves.